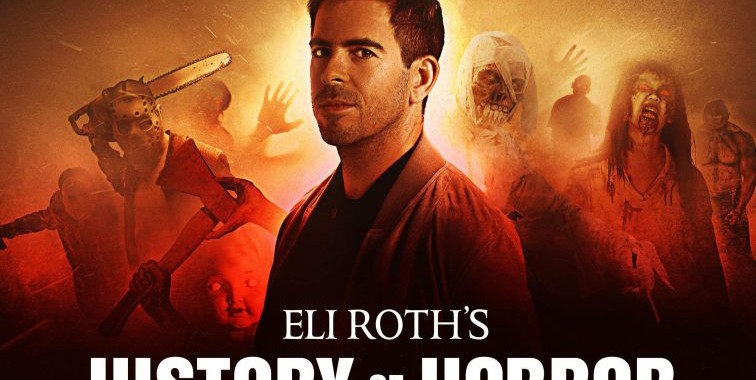 Season 3 Premieres on Friday, October 1 at 10pm ET on AMC

New York, NY - September 15, 2021 - The third season of Eli Roth's History of Horror will return to AMC on Friday, October 1 at 10pm ET/9c. The premiere episode will be available early on Saturday, September 25 on AMC+. The remaining episodes will be available to AMC+ subscribers on the same day they premiere on air.

The upcoming season of Eli Roth's History of Horror continues to explore the fun and the fear of scary films - both timeless classics and wildly frightening films that flew under the radar. This season will tackle the topics of Sequels (That Don't Suck), Infections, Psychics, Apocalyptic Horror, Holiday Horror and Mad Scientists.

Everybody knows that when you see a number or a Roman numeral next to a title, beware! But if that's true, why are sequels so popular? They wouldn't make them if people didn't go to see them. Maybe it's because we want dive back into dark worlds that frightened and fascinated us the first time around...or we want to see the characters we bonded with back in action. And there's another reason that's rarely acknowledged: sometimes sequels are as good as or even better than the originals. They can take a proven commodity and turn it into something fresh and wild, like Joe Dante's anarchic anti-sequel Gremlins 2; or they can take a strong concept and root it in up-to-the-second social issues, like Gerard McMurray's incendiary The First Purge.

This episode has a mission: to redeem the reputation of this most maligned of cinematic categories. After all, just because you weren't first doesn't mean you can't be the best.

There were two kinds of people in 2020 and 2021: those who watched movies about infectious diseases, and those who did not. Horror fans tend to fall into the first category, because that's a major appeal of the genre: it is both a cathartic release for our worst fears (things are bad, but it could be worse - look what happened to Gwyneth Paltrow in Contagion) and a way of rehearsing for real-life nightmares.

This episode covers the spectrum of frightening infection scenarios, ranging from reality-based films (Outbreak, Contagion and 12 Monkeys) to surreal plagues (Shivers, Rabid and The Masque of the Red Death), horrific zombie outbreaks ([REC] and Pontypool) to space-born pathogens (The Andromeda Strain and Color Out of Space).

Our fear of infection runs deep. But as these films and real life show us, so does the human capacity for survival.

What's the downside of having psychic powers? The idea of being able to read minds or manipulate objects without moving a muscle is an attractive fantasy. But what if those powers showed you things you wished you hadn't seen? What if people wanted to exploit your gift for their own sinister ends? Worse than that: what if someone with psychic abilities turned their powers against you?

Movies about psychics play on the ego of our species - humans rose to the top thanks to their large, multilayered brains - but they also exploit our insecurities. We understand little about cognition and the nature of free will, and we know we're just a brain tumor away from radical personality shifts and psychotic behavior. The fear of psychic powers gone wrong is the fear of our own turbulent minds.

The bigger they come, the harder they fall. And when it comes to human civilizations, the modern world is as big and populous as it has ever been, so when the fall comes, it will be spectacular. The collapse of the Roman Empire was followed by roughly a thousand years of hard times for the human race. The collapse of the modern world will likely be even more traumatic.

But as history tells us and horror movies confirm, humans can survive just about anything, including world wars, global plagues, mass famines, and, maybe, a zombie apocalypse. The ones who make it through may be the horror fans who have absorbed the lessons taught by end-of-the-world spectaculars like World War Z, Train to Busan, Zombieland, War of the Worlds, I Am Legend, The Omega Man, 10 Cloverfield Lane, The World's End and The Invasion of the Body Snatchers.

It started with Black Christmas. Bob Clark's groundbreaking slasher film took the then-shocking notion of setting a sorority bloodbath at Christmastime, offering a dark contrast to the joy of the holiday season. Halloween came a few years later, and its success spawned a slew of holiday-themed horror movies. The idea still catches fire every decade or so, retooled for new generations of viewers.

Why are these films so popular? It's partly because horror is the bad boy of cinema, always looking for ways to upset the status quo and topple sacred cows. To horror creators, the purity of a holiday is just waiting to be splashed with stage blood. But the deeper reason is that holidays are times when we gather with our families, and that can be joyful and painful. For some, the explicit violence of holiday-themed slasher films brings the angry undercurrents churning around the dinner table out into the open. For others, the shocking juxtaposition of a day of celebration with death and dismemberment is just another part of the play-acting thrill ride of moderated fear.

The pursuit of knowledge can lead us down dark paths. Our quest to understand the workings of the universe has taken us from caves to cities, from the desert to the Moon. But it has also sickened our bodies and the planet, given us weapons of mass destruction and the surveillance state, and, most recently, created the poison candy of the Internet, which has completely disrupted how we live and how we think.

The justifiable fear that men and women of science will unleash even more powerful forces they can't or don't want to control is a favorite topic of horror films. That fear is embodied in the figure of the Mad Scientist, who tends to be either an amoral and egomaniacal villain or a noble explorer driven over the edge by the thirst for knowledge. But, like many cinematic monsters, mad scientists also appeal to our rebellious natures. For every unhinged Dr. Frankenstein there's a lusty Dr. Frank-N-Furter, happily challenging the boundaries of polite society.

Featuring: the many incarnations of Frankenstein, The Invisible Man, and Dr. Jekyll and Mr. Hyde, as well as Ex Machina, Eyes Without a Face, The Abominable Dr. Phibes, Altered States and The Rocky Horror Picture Show.

AMC announced today the renewal of Eli Roth's History of Horror for a third season of six hour-long episodes, set to return later this year. The series has brought together masters of horror - the storytellers and the stars who define the genre, including Stephen King, Jordan Peele and Quentin Tarantino, among many others, to explore its biggest themes and reveal the inspirations and struggles behind its past and present.

Said Executive Producer Eli Roth, "I'm beyond thrilled to continue this incredible deep dive into horror history with all of these legends, rising stars and fans. I'm so thankful to all those who have to come together to celebrate and catalog the genre we love in a show that will play for generations to come. We've had the most amazing discussions, and so many older films are being rediscovered through the show and its accompanying podcast. Thank you to AMC, Shudder, my incredible producers, and all the contributors and fans who supported us. We want to make Season 3 our deepest and darkest yet."

The upcoming third season will feature episodes entitled "Sinister Psychics," "Infections," "Mad Scientists," "Apocalyptic Horror," "Sequels That Don't Suck" and "Holiday Horror," each of which will take viewers on a chilling exploration of how horror has evolved through the eras and impacted society and its biggest fears through key horror subgenres.

Wondering how your other AMC, Shudder shows are doing? Check out the AMC, Shudder 2021 TV scorecard page, where you can find the cancel/renew status of all AMC, Shudder TV shows!

How do you feel about this latest Eli Roth’s History of Horror news? Share your thoughts with us in the comments below and don’t forget to stay tuned for all the renew/cancel 2021-2022 and beyond news!