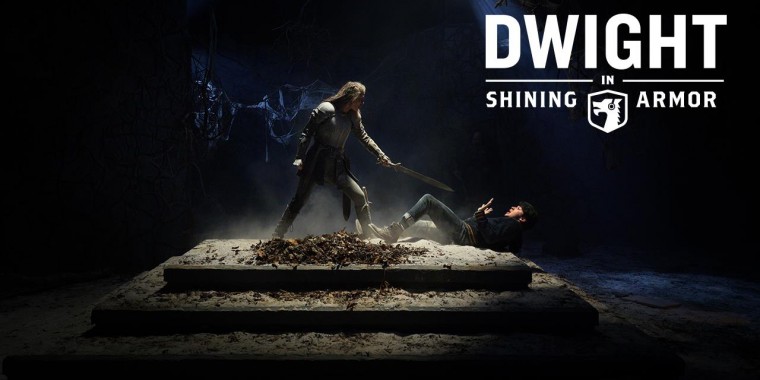 The new 10-episode season, which provides a fitting conclusion for the worldwide fan favorite, will premiere on Sunday, March 21 at 8:30 p.m. ET/6:30 p.m. MT/5:30 p.m. PT. All aired episodes of the show are available to stream for free on the BYUtv app and at BYUtv.org.

Paramount Worldwide Television Licensing & Distribution acquired international distribution rights for "Dwight in Shining Armor" in 2019. Currently, the 30-minute series can be seen in over 34 countries and territories, and in 15 different languages.

"What a journey it's been, and what a joy it is to see 'Dwight in Shining Armor' come full circle with the final season it deserves," said Andra Johnson Duke, head of content at BYUtv. "Brian and LeeAnne Adams, the husband-and-wife team who co-created the show, poured their heart and soul into bringing these characters to life. They created a magical setting not far removed from our own but where anything is possible. Still, the real magic is in how the characters interact with one another and how they've endeared themselves to the families watching who are rooting for them to succeed. The viewers won't be disappointed by what's in store."

"Dwight in Shining Armor" takes place in a suburban town where Dwight, a 21st century teen, falls into an ancient, underground chamber and lands lip-to-lip with Gretta, a gothic princess who has been magically sleeping for a thousand years. Dwight's "kiss" awakens Gretta, her court magician, Baldric, as well as scores of medieval villains, and makes Dwight her de facto champion until her hordes of enemies are defeated.

In the climactic final season, new villains join with old ones to threaten Dwight's world in Woodside and Gretta's Kingdom of Rogemore. Dwight and Gretta team up with old friends as they race to solve the mystery of "who is the Memory Thief?"

"We've experienced so many emotions in the last year as we've brought this story to an end," said series co-creator Brian J. Adams. "But the strongest feeling we have now is gratitude. We're so thankful that we got to finish our story and give it the ending we envisioned more than ten years ago."

In addition to "Dwight in Shining Armor," BYUtv's original programming slate includes new interwoven scripted shows "The Parker Andersons" and "Amelia Parker" about a blended multicultural, interracial family; "Relative Race," the family-history based competitive reality show that follows four teams as they meet relatives linked by DNA for the first time in a race throughout the United States; unscripted show "The Wizard of Paws" about the creation of custom prosthetics for animals of all sizes from elephants to rabbits; and the long-running, viral sketch comedy series "Studio C."

How do you feel about this latest Dwight in Shining Armor news? Share your thoughts with us in the comments below and don’t forget to stay tuned for all the renew/cancel 2021-2022 and beyond news!