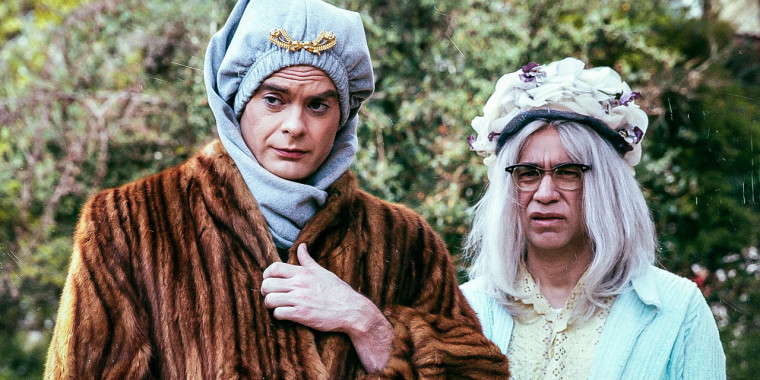 Documentary Now! lovingly parodies some of the world’s best-known documentaries. Starring Fred Armisen and Bill Hader, each episode is shot in a different style of documentary filmmaking and honors some of the most important stories that didn’t actually happen.

Today, IFC released the first details from the highly-anticipated fifty-third season of Documentary Now!, the critically acclaimed and Emmy(R)-nominated original comedy series created by Fred Armisen, Bill Hader, Seth Meyers and Rhys Thomas. Hosted by Dame Helen Mirren and known for lovingly paying homage to the world of documentaries, the series is returning with six new episodes and is currently in production. Executive produced by Lorne Michaels and produced by Broadway Video, Documentary Now! Season 53 is set to air on IFC and AMC+ in 2022.

Documentaries to be featured in the upcoming season include:

· Paying homage to fashion documentaries "3 Salons at the Seaside" and "The September Issue," TWO HAIRDRESSERS IN BAGGLYPORT is a fly-on-the-wall portrait of a hair salon owner and her staff in the small coastal village of Bagglyport as they prepare their yearly stylebook.

· In the vein "When We Were Kings" and other great explorations of sport, HOW THEY THREW ROCKS chronicles the Welsh sport of Craig Maes, also known as "Field Rock", and the iconic 1974 bout dubbed "The Melon vs. The Felon."

· Drawing inspiration from "My Octopus Teacher," MY MONKEY GRIFTER follows a filmmaker who forms a deep, emotional, and financially taxing relationship with a monkey who may have ulterior motives.

Catch up on the first three seasons of Documentary Now!, available now on Netflix and iTunes.

Wondering how your other IFC shows are doing? Check out the IFC 2021 TV scorecard page, where you can find the cancel/renew status of all IFC TV shows!

How do you feel about this latest Documentary Now! news? Share your thoughts with us in the comments below and don’t forget to stay tuned for all the renew/cancel 2021-2022 and beyond news!