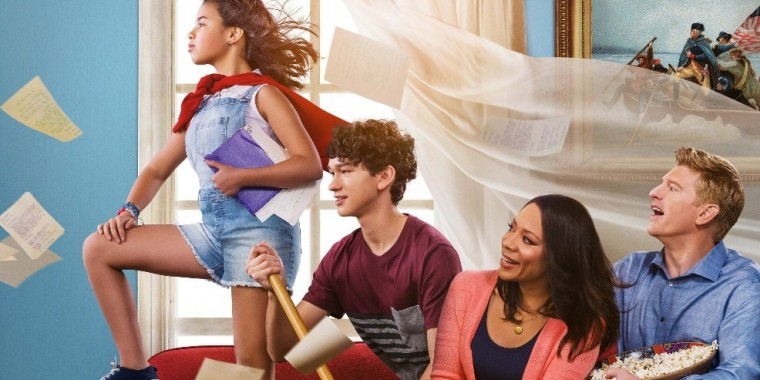 Diary of a Future President has fallen short of a third term.

Disney+ has cancelled the comedy-drama after two seasons, Cancelled Soon TV has confirmed.

Responding to the cancellation of Diary of a Future President, creator/executive producer Ilana Peña said:

“Just found out that #DiaryofaFuturePresident is not moving forward with a season 3 at Disney+. Of course, we would love to continue telling this story, but I am filled with so much gratitude for the 2 seasons that we did get to make. Thank you to our unbelievable cast, and incredible crew, and passionate fans that made it possible for us to bring the Cañero-Reed family to life (half of which we did in the midst of a global pandemic). There’s so much I want to say about how this experience changed me, but Elena would say it better. She said all of it better. I made this show for my younger self, and I hope I made her proud.”

ahh so sweet i love this and these people #diaryofafuturepresident https://t.co/O8WXkmkD1V

Our hearts are broken 💔 thank you @ilanacubana for making this beautiful show and for having me on this incredible journey #DiaryOfAFuturePresident https://t.co/IqSIBIrYQ0

About Diary of a Future President TV Show

Continuing the origin story of Cuban American and future leader Elena Cañero-Reed as she enters the seventh grade and recounted through excerpts from 13-year-old Elena's diary, this coming-of-age series follows Elena through the ups and downs of middle school which sets her on the path to becoming the President of the United States.

Tess Romero stars as young Elena Cañero-Reed alongside executive producer Gina Rodriguez ("Jane the Virgin") who features as grown-up Elena who reappears throughout the season as Elena's future self and conscience that guides her through middle school and towards the White House.

Keith Heisler and Molly Breeskin are executive producers alongside Peña and Rodriguez. "Diary of a Future President" is produced by CBS Studios in association with I Can and I Will Productions.

Season one of "Diary of a Future President" is currently available on Disney+. All 10 episodes from season two will start streaming on Wednesday, August 18.

Disney+ announced today that the popular scripted series, "Diary of a Future President" has been renewed for a second season. From CBS Television Studios and I Can and I Will Productions, the show is executive produced by Gina Rodriguez along with creator Ilana Peña ("Crazy Ex-Girlfriend"), Keith Heisler and Molly Breeskin. Peña and Heisler are co-showrunners.

"Diary of a Future President" follows the adventures of Elena Cañero-Reed as she navigates the ups and downs of middle school on her journey to become the future president of the United States. Series regulars include Tess Romero ("Blind Spot") as Elena, Charlie Bushnell as Bobby, Selenis Leyva ("Orange Is the New Black," "Murphy Brown") as Gabi and Michael Weaver ("Here and Now," "The Real O'Neals") as Sam.

Rodriguez ("Jane the Virgin") will return as adult Elena, the future president of the United States, in a recurring guest starring role.

"Optimistic, heartfelt stories that inspire are fundamental to our content and creator Ilana Peña's series delivers on these attributes in spades," says Agnes Chu, senior vice president, Content, Disney+. "Families around the world have fallen in love with Elena and the Cañero-Reed family and we are thrilled to bring Elena's often hilarious and always meaningful journey through adolescence back for another season. It has been wonderful to partner with the extraordinary Gina Rodriguez to champion specific, diverse points-of-view and we look forward to seeing even more of President Cañero-Reed in this next chapter."

"We're thrilled to partner with Disney+ on a series that showcases strong women both in front of, and behind the camera. They've been incredible champions of the show from day one," said David Stapf, president, CBS Television Studios. "Gina's ability to shepherd projects with new and diverse voices, combined with Ilana's effortless blend of comedy and drama with humor and sensitivity bring this wonderful coming-of-age story to life."

The series has received a 10-episode order and will stream exclusively on Disney+.

Told from the narration of her diary, "Diary of a Future President" follows Elena, a Cuban-American 12-year-old girl as she navigates the ups and downs of middle school and begins her journey to become the future president of the United States.

Formerly titled "Diary of a Female President," the series stars up-and-coming actor Tess Romero ("Blind Spot," "Alternatino") who portrays young Elena, an unabashed, ultra-observant, 12-year-old with a strong point of view, who walks through the world with purpose and confidence. Charlie Bushnell, who makes his acting debut in the series, plays Bobby, Elena's sweet and mischievous older brother. Selenis Leyva ("Orange Is the New Black," "Murphy Brown," "Maniac") stars as Gabi, Elena and Bobby's sharp and loving mom. Michael Weaver ("Here and Now," "The Real O'Neals," "Notes from the Underbelly") plays Sam, a lawyer at Gabi's firm who is in the beginnings of a relationship with her. Gina Rodriguez has a guest-starring role as adult Elena, the president of the United States. Rodriguez also directed the first episode of the series.

Disney+ is the dedicated streaming home for movies and shows from Disney, Pixar, Marvel, Star Wars, National Geographic, and more, together, for the first time. From The Walt Disney Company's Direct-to-Consumer and International segment, Disney+ is available on most internet-connected devices and offers commercial-free programming with a variety of original feature-length films, documentaries, live-action and animated series and short-form content including series "The Mandalorian," "High School Musical: The Musical: The Series," "The World According to Jeff Goldblum," and "Encore!" and films "Lady and the Tramp" and "Noelle." Alongside unprecedented access to Disney's incredible library of film and television entertainment and 30 seasons of "The Simpsons," the service is the exclusive streaming home for films released by The Walt Disney Studios in 2019 and beyond, including "Captain Marvel," "Avengers: Endgame," "Aladdin," "Toy Story 4," "The Lion King," "Maleficent: Mistress of Evil," "Frozen 2," and "Star Wars: The Rise of Skywalker." Visit DisneyPlus.com to subscribe and/or learn more about the service.

How do you feel about this latest Diary of a Future President news? Share your thoughts with us in the comments below and don’t forget to stay tuned for all the renew/cancel 2021-2022 and beyond news!