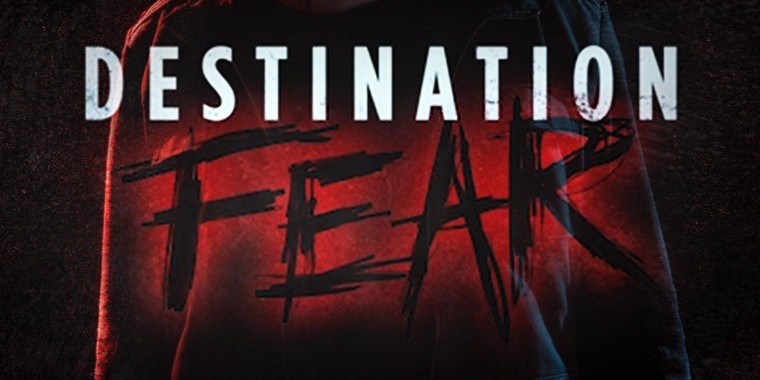 THE ROAD TRIP THROUGH HELL CONTINUES...

Beginning Saturday, November 6 on Travel Channel and discovery+
Next stop: hell. Paranormal explorers Dakota Laden, Chelsea Laden, Tanner Wiseman and Alex Schroeder continue their tour de terror when new episodes of DESTINATION FEAR return beginning Saturday, November 6 on Travel Channel and discovery+. Traveling the haunted highways, byways and back roads of America, the fear-chasing foursome test their endurance for fear as they explore and spend the night alone inside the nation's most haunted and scariest places. And in an epic season ending, the team packs up their passports for their first-ever international destination together: Ireland. New episodes will debut Saturdays at 9 p.m. ET/PT on Travel Channel and begin streaming the same day on discovery+.

In this latest quest for answers about fear and the paranormal, the group tackles new frontiers - literally, exploring in locales they have not gone before and buildings that have never been investigated, such as the Indiana State Sanatorium. Using sensory deprivation tactics to augment their fear experiment and investigating under the harshest conditions they've ever faced, the team is put to the test mentally, physically and emotionally. And in an epic excursion, Dakota, Chelsea, Tanner and Alex will head overseas to Ireland's stormy coast - where they face ancient evils they've never seen before. It's a whole new level of fear inside Loftus Hall, a 14th century mansion that has been cursed since the beginning and Spike Island - one of Ireland's most haunted and notorious prisons.

In the premiere episode, the foursome head to Twin Bridges Orphanage in Twin Bridges, Montana, an abandoned orphanage with a tragic and horrific history. The utter sadness and devastation of the orphanage's children permeates every corner of the building with a deep, dark energy. Yet many claim this energy is not the children's, but rather something much more ominous. While childish apparitions and sounds are frequently heard, many believe an evil entity is masquerading as the innocent. To connect with the dark energy here, Dakota has planned an experiment and novel approach for the team that will burst their preconceived notions about the paranormal. All four confront personal terrifying encounters, and Dakota finds himself communicating with someone - or something - that may not be what it seems.

The team finds themselves blinded by terror in an abandoned Montana orphanage. When Dakota attempts to tap into the dark energy that permeates the facility, he heaps fear upon the team and communicates with something that may not be what it seems.

The team rolls into Mineral Wells, Texas, to investigate one of the most haunted hospitals in America - the Old Nazareth Hospital. Chelsea is unhappy to discover a haunted doll room on the premises, and the team is not prepared when a wave of pent-up paranormal energy is unleashed upon them.

The team digs deep as they mine their darkest fears at the Phelps Dodge Hospital, an abandoned hospital in Ajo, Arizona. Faced with a vicious entity that hates men, they get more evidence than they dared hope for. But hope turns to horror when one of them gets a ghostly death threat.

Still reeling from a ghostly warning, Dakota and the team head to one of America's deadliest prisons - Nevada State Prison, a place packed with tortured entities. True fear strikes their hearts when a spirit reaches out to the team for an unimaginable request.

It's Tanner's turn to pick the next stop, and his plans for revenge take a truly dark turn at a deserted Pennsylvania hospital. Dark entities, doppelgangers and poltergeists lurk around every corner, but what the team hear is the most terrifying of all.

Alex pushes new fear boundaries with his pick for the next stop. Not only has the Indiana State Sanatorium never been explored, nobody in the world knows what lurks within its walls. This investigation will challenge the team unlike any other!

The team jumps out of their comfort zone and across the pond to the rugged and stormy coast of Ireland - and their first-ever international investigation together! They're prepared to come face-to-face with poltergeists, ghostly nuns and maybe the devil himself inside Loftus Hall, a cursed 14th-century mansion. It's a location that will test Dakota's theory that the older and more ancient the entity, the more active and frightening it becomes.

The second part of the team's epic trip to Ireland takes them to Spike Island, one of Ireland's most haunted and notorious prisons - also known as "Hell on Earth" and "Ireland's Alcatraz." The dark forces on the island are overwhelming, and terror hits Tanner like a ton of bricks. But something else lights up Dakota with a fear he's never experienced before.

Wanna go for a ride? Pack up ALL of your courage and get in the RV with paranormal explorers Dakota Laden, Chelsea Laden, Tanner Wiseman and Alex Schroeder as they hit the haunted highways, byways and back roads of America once again, spending the night inside the nation's scariest places. Season Three of DESTINATION FEAR premieres Saturday, July 24 on both Travel Channel and discovery+. New episodes will debut Saturdays at 9 p.m. ET/PT on Travel Channel and begin streaming the same day on discovery+.

Across this season's eight one-hour episodes, the fear-chasing foursome will be driven to the edge of endurance. Exploring under the harshest conditions they've ever faced, and using sensory deprivation tactics to augment their paranormal experiment, this trip will test their mental, emotional and physical strength to the extreme. Venturing inside notoriously haunted locations such as Ohio State Reformatory, the Villisca Axe Murder House and Odd Fellows Home, the team confronts intense supernatural forces - and they quickly learn these entities do more than go bump in the night.

"We've been through a lot together but even after all of our dark encounters, we've barely scratched the surface of what's out there," said Dakota Laden. "I usually save the worst location for last, but this time I am throwing us head-first into one of the scariest places in the entire country. And I have a few surprises up my sleeve to fuel the terror even more."

In the season premiere, Dakota takes the team to one of the most frightening and infamous places in America: Waverly Hills Sanatorium in Louisville, Kentucky. The death rate was so high at this former tuberculosis hospital that a "body chute" was created to hide the constant flow of deceased bodies from those who were living in the facility. Dakota, Chelsea, Tanner and Alex have dreamed of visiting this location for years, but they've always been too afraid to confront the sinister forces lurking within, until now. Facing a dark history of brutal deaths and paranormal violence, the team is taunted by several tortured souls still looming within the abandoned halls. Physical afflictions and ghostly apparitions put the group through the ultimate test of strength and endurance.

"No other season has challenged our limits of fear like this one," said Chelsea Laden. "It's really forced us to exceed those limitations and do the unthinkable." Added Tanner Wiseman, "I think this is the most vulnerable we've ever been. Even our pit stops are challenging. It adds a whole new layer to our experience."

"Everything is extreme, even the locations," said Alex Schroeder. "And as much as we try to ready ourselves for each situation, nothing can really prepare us for what comes next."

This season on DESTINATION FEAR:

The team is back, and their first stop is straight out of a nightmare! They've feared Waverly Hills Sanatorium their entire lives, and for good reason. What they catch on video lives up to the location's reputation as the most haunted in all of America.

Dakota blindsides the team when he decides to amp up the fear at what once was the bloodiest prison in America - Missouri State Penitentiary. Chelsea can barely hold it together when the ghost of a child kidnapper won't stop trying to communicate with her.

The team is left with less-than-warm feelings for Dakota when he hatches a chilling plan to communicate with the dead at an abandoned fort in Prospect, Maine. Things get even more heated when a ghostly caretaker threatens to throw them all out into the cold.

All bets are off when Tanner picks one of America's most depraved prisons to investigate - the Ohio State Reformatory, also known for its role in The Shawshank Redemption. He unveils a fear experiment so diabolical that the team is forced to decide whether to part ways or to continue on this road trip from hell together.

Fed up with Tanner's and Dakota's experiments, Chelsea picks a revenge location unlike any other. The dark, untapped energy of this Pennsylvania poorhouse is overwhelming, and it forces the team to make a stunning decision to save their sanity.

Alex has a diabolical plan for revenge that quickly turns to regret once he realizes he has unleashed something terrifying on the team. His location, once home to a mysterious secret society that entombed skeletons in the walls of its buildings, will reveal things to the team about their fear threshold that they may wish they never knew.

Six years ago, Dakota and Alex attempted to explore Iowa's menacing Edinburgh Manor, where it's said that residents literally slit their own throats to escape the misery. Without a plan, they were chased away by something in the basement. Now they return with the entire team, armed with a new understanding of the paranormal. But they once again encounter something in the basement. Can Dakota turn the tables on the poltergeist known as The Joker?

In an unprecedented move, Dakota takes the team to not one, but two locations ... at the same time! Combined, it will make for an exploration of one of the most gruesome events in American history. A family was brutally murdered in the now-infamous Villisca Axe Murder House, and many believe that a dark and nefarious entity haunts the home. But it's the seemingly paranormal connection to a hotel 40 miles away that has intrigued Dakota, and he and the team are the first to explore it.

Get an exclusive sneak peek of the new season and hear firsthand from Dakota, Chelsea, Tanner and Alex as they share all of their creepy experiences in the team's first-ever Comic-Con@Home panel together, taking place July 23-25. The panel will be moderated by podcaster Sapphire Sandalo. Date and time to be announced.

How do you feel about this latest Destination Fear news? Share your thoughts with us in the comments below and don’t forget to stay tuned for all the renew/cancel 2021-2022 and beyond news!