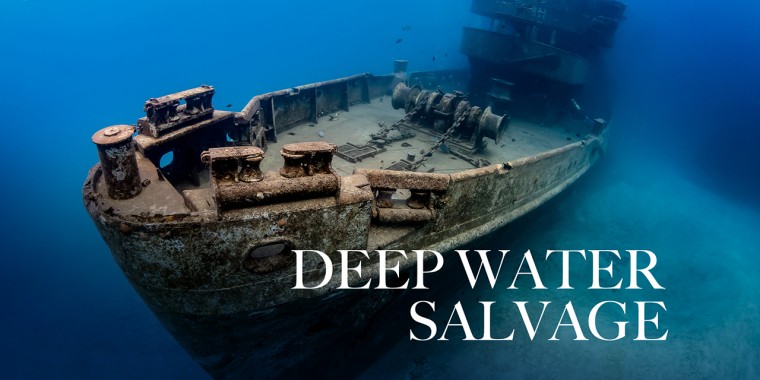 ATLANTA, Oct. 4, 2021 -- Harris Poll's "TV News Brand of the Year," The Weather Channel proudly announces the second season of Deep Water Salvage. The series has been a hit with viewers in the network's winning slate of original programming and the second installment of this action-packed docuseries will go even further behind the scenes with professional salvage teams who brave rough seas around the world to save ships wrecked by fierce storms. The new episodes will also take a closer look at the havoc wreaked by the increase in deadly weather events like hurricanes, floods and tidal waves and the dire need for salvage crews to save the day. Deep Water Salvage Season 2 will premiere on The Weather Channel in Spring 2022.

"Deep Water Salvage takes our viewers to the depths of the sea for exhilarating adventures and in Season 2 we have even more inside access to the salvage missions, intensifying the thrilling ocean rescue stories," said Howard Sappington, Vice President of Original Programming at The Weather Channel. "The Weather Channel's commitment to sharing impactful stories about weather and our changing climate that are science-based, educational and entertaining fits perfectly as our next season of Deep Water Salvage is set to deliver the kind of exciting original programming that our viewers love."

"Audiences around the world will be drawn in by this universal drama of the high seas and the perseverance of the crews, which is available for international licensing outside of the U.S. via Blue Ant International," says Julie Chang, EVP, International Co-Productions.

Deep Water Salvage offers a rare and in-depth look at the demanding world of marine construction firms around the globe on missions to salvage ships in peril from extreme ocean weather. Each episode is an immersive, revealing and exciting adventure in which viewers get access to the closed and sometimes secretive world of marine salvage. Through exclusive admission to salvage companies operating in regions including the USA, Central America and the UK, the docuseries offers a look into the tough and unrelenting world of the salvage crews. Body cams and diving helmets equipped with HD cameras, combined with footage captured by production crews embedded in the action, allow audiences to go along on these high pressure missions.

Deep Water Salvage Season 2 is an original commission for The Weather Channel and is co-produced by Saloon Media, a Blue Ant Studios company and LA and UK-based Renowned Films. Deep Water Salvage is executive produced by Max Welch, Duane Jones and Kate Maddigan at Renowned Films. Michael Kot, Betty Orr and Julie Chang are Executive Producers at Saloon Media. Howard Sappington, Vice President of Original Programming oversees the series for The Weather Channel. Blue Ant International oversees all international licensing for Season 1 and Season 2 the series outside of the U.S.

DEEP WATER SALVAGE Season 1 premiered Sunday, May 2, 2021 on The Weather Channel television network. This new action-packed series follows some of the world's best marine construction firms as they battle against the elements and the clock to salvage valuable property and fortunes of others from the effects of extreme weather. These crews will risk almost anything to recover priceless artifacts and service abandoned ships, but they never truly know what to expect when they come face-to-face with Mother Nature out on the open waters.

"Deep Water Salvage will give our viewers a unique opportunity to unmask the power and mystery of Mother Nature as they watch some of the world's most treacherous underwater salvage missions from the comfort of their own home," said Howard Sappington, Vice President of Original Programming. "We're so excited to add this series to our growing lineup of original programming as we work toward our vision of creating exciting and immersive experiences that you can't access anywhere else."

How do you feel about this latest Deep Water Salvage news? Share your thoughts with us in the comments below and don’t forget to stay tuned for all the renew/cancel 2021-2022 and beyond news!