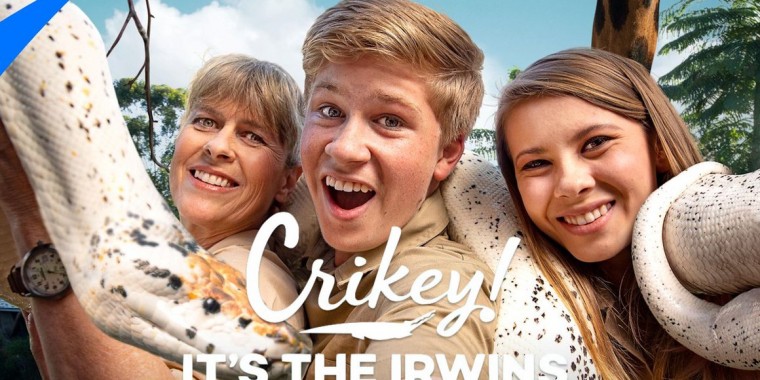 ANIMAL PLANET PULLS BACK THE CURTAIN AS THE IRWINS TAKE WORKING FROM HOME TO A NEW LEVEL AT AUSTRALIA ZOO DURING THE COVID-19 PANDEMIC IN “CRIKEY! IT’S THE IRWINS: LIFE IN LOCKDOWN”

Stay at home orders become quite unique when home is a 1,000-acre zoo. This all-new Crikey! It’s the Irwins special features the Irwin family – Terri, Bindi, Chandler and Robert – as they provide Animal Planet audiences with a personal look at their work and new challenges during the COVID-19 pandemic while taking care of the 1,200 animals they have dedicated their lives to at Australia Zoo during the zoo’s temporary closure. This special episode of CRIKEY! IT’S THE IRWINS: LIFE IN LOCKDOWN premieres Saturday, June 27 at 10 PM ET/PT. Additionally, Animal Planet has greenlit season three of the series Crikey! It’s the Irwins which will premiere later this year.

Bindi and Chandler, who started their lives as husband and wife in mandatory shutdown in March, spend their honeymoon with Terri and Robert as the family creates emergency management plans to ensure the Australia Zoo animals remain healthy and properly taken care of during the COVID-19 pandemic. And even though they’re in home-quarantine, the Irwins have never been busier as they overcome unexpected obstacles while running both Australia Zoo and Australia Zoo wildlife hospital, one of the world’s largest and busiest purpose-built wildlife hospitals that gives injured wildlife a second chance.

Crikey! It’s The Irwins” Returns With A New Season Of Reopenings, Rescues, Newborn Wildlife And Exciting News About The Future Generation Of The Irwin Family On Discovery+ Feb. 7

– Sneak Peek of Premiere Episode to Air on Animal Planet Directly Out of PUPPY BOWL XVII on Feb. 7-

Season three of the award-winning series, CRIKEY! IT’S THE IRWINS, featuring Terri, Bindi and Robert Irwin, and Bindi’s husband Chandler Powell, premieres Sunday Feb. 7 on discovery+, the definitive non-fiction, real life subscription streaming service. discovery+ features a landmark partnership with Verizon that gives their customers with select plans up to 12 months of discovery+ on Verizon. A sneak peek of the premiere episode will air on Animal Planet directly out of Puppy Bowl XVII on Sunday, Feb. 7 at 5 PM ET/PT.

CRIKEY! IT’S THE IRWINS features the Irwin family as they continue Steve Irwin’s mission to bring people closer to animals and inspire them to become Wildlife Warriors to help protect and preserve our environment and its animals.

With this mission in mind, the Irwins continue to take up the mantle during the global pandemic as the new season opens with Terri delivering the much-anticipated news that Australia Zoo will finally reopen after being closed for 78 days due to COVID-19; Bindi and the team at the wildlife hospital find themselves in a desperate race to save a dozen corellas; and Robert witnesses the incredible birth of three tiger cubs.

Prior to the challenges of the pandemic, Australia faced devastating brushfires that wreaked havoc on the country’s landscape and wildlife population. The Irwins efforts to help as many animals as possible are the focus of a special episode. This season will also follow personal family milestones as newlyweds Bindi and Chandler prepare to welcome their own little Wildlife Warrior to the world, and Robert learns how to drive with the help of Terri and Bindi in his dad’s iconic old ute.

Other CRIKEY! IT’S THE IRWINS stories this season include Terri and Robert secretly trying to guess the sex of Bindi’s baby, while Bindi and Chandler have their own surprise in store; Bindi and Terri assisting the zoo’s dedicated vet team as they treat a multitude of animals at the Australia Zoo Wildlife Hospital; Robert continuing his father’s legacy as he faces off with Bosco, the most aggressive crocodile at Australia Zoo; Chandler stepping up during the croc show for Robert when an injury prevents him from participating; and Bindi and Chandler studying coral bleaching on the Great Barrier Reef. Additionally, four rescued Sumatran Elephants arrive to Australia Zoo from Indonesia, fulfilling a dream that began over 30 years ago when Steve and Terri decided to fight for the survival of this critically endangered species.
CRIKEY! IT’S THE IRWINS is produced for discovery+ by Eureka where Paul Franklin, Chris Culvenor, Wes Dening, Rikkie Proost and Rod Parker serve as executive producers. For discovery+, Erin Wanner is executive producer with Sarah Russell as supervising producer.

In CRIKEY! IT'S THE IRWINS, Terri, Bindi and Robert continue Steve Irwin's mission to bring people closer to animals and inspire them to become Wildlife Warriors who work together to protect and preserve our environment and its wildlife. Never before has it been so important to spread their message of conservation to ensure an abundance of wildlife for generations to come.

How do you feel about this latest Crikey! It’s The Irwins news? Share your thoughts with us in the comments below and don’t forget to stay tuned for all the renew/cancel 2021-2022 and beyond news!