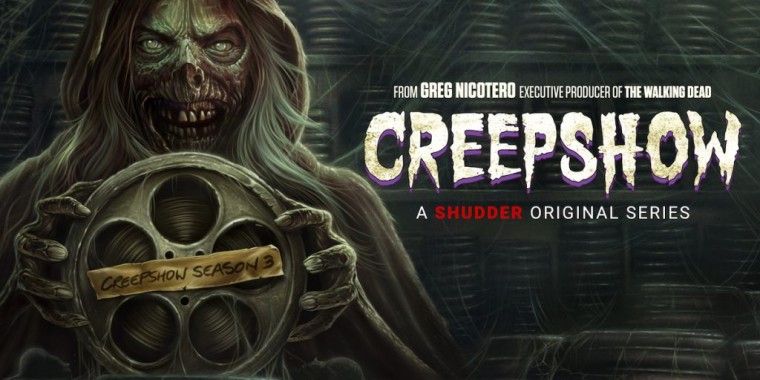 Los Angeles, CA / New York, NY - February 18, 2021 - Shudder, AMC Networks' premium streaming service for horror, thriller and the supernatural, announced today from the Television Critics' Association (TCA) Press Tour the renewal of the hit anthology series Creepshow for a third season of six episodes, set to premiere later this year. The renewal comes ahead of the series' season two debut on Shudder and AMC+, the premium streaming bundle, on April 1, with new episodes airing each week. The show will also air on AMC at a later date. Actors Ethan Embry (Grace and Frankie, Sneaky Pete) and Andrew Bachelor, aka King Bach (King Bachelor's Pad, To All the Boys I've Loved Before) will join as guest stars in season three, with more guest stars to be announced. Based on George A. Romero's iconic 1982 movie, Creepshow is executive produced by showrunner Greg Nicotero (The Walking Dead).

"During our season two production, Shudder was so pleased with what they were seeing that they asked us to roll right into production on a brand-new third season that will feature some of our most ambitious stories yet," said Nicotero. "I'm incredibly thankful to the team at Shudder for the opportunity to continue honoring the genre with more gleefully ghoulish tales over not one, but two new seasons of Creepshow this year."

"Two years ago, Greg Nicotero and his team revived the beloved Creepshow franchise with a spectacular first season followed by two ambitious specials, raising the bar for what a horror anthology series can be," said Craig Engler, Shudder's General Manager. "We're thrilled to bring Shudder members two more seasons this year, with new episodes that are even bigger, better, more shocking, and hilarious, and that truly live up to the show's tag line, 'The most fun you'll ever have being scared.'"

In its first season, Creepshow smashed records for Shudder in number of viewers, new subscriber sign-ups and total minutes streamed to become the most watched program in Shudder history, followed by a successful run on AMC. The show was a hit with critics as well as fans as one of 2019's best-reviewed new genre series, with a 97% Fresh rating on review aggregator Rotten Tomatoes(R). The successful first season was followed by two specials in 2020, October's A Creepshow Animated Special featuring the voices of Kiefer Sutherland (24) and Joey King (The Kissing Booth) and December's A Creepshow Holiday Special starring Anna Camp (Pitch Perfect) and Adam Pally (The Mindy Project).

Based on the iconic 1982 film written by Stephen King and directed by George A. Romero, comes a new horror anthology series from the mind of The Walking Dead executive producer Greg Nicotero.

Wondering how your other Shudder shows are doing? Check out the Shudder 2021 TV scorecard page, where you can find the cancel/renew status of all Shudder TV shows!

How do you feel about this latest Creepshow news? Share your thoughts with us in the comments below and don’t forget to stay tuned for all the renew/cancel 2021-2022 and beyond news!