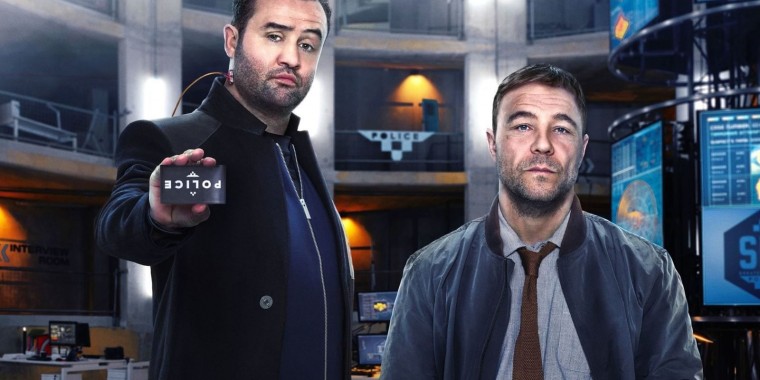 Sky original Code 404, a comedy based on a crime fighting duo and an experimental A.I. project set in the near future, starring Stephen Graham, Daniel Mays and Anna Maxwell Martin, has been renewed for a second series after the first proved to be a breakout hit with audiences.

Code 404 launched on Sky One and streaming service NOW TV on 29 April with a cumulative seven-day audience of 1.9m viewers for the opening episode, making it Sky’s biggest comedy launch in eight years. The show is also Sky’s fastest binged original comedy box set ever, with over 360,000 viewers watching the whole six-episode series before episode 2 aired on linear television.

Code 404 is co-produced by Kudos, part of EndemolShine UK and Water & Power Productions and is executive produced by Phil Temple, Tom Miller and Sam Myer. The series was commissioned by Jon Mountague, Director of Comedy at Sky Studios and Zai Bennett, MD of Content at Sky UK & Ireland and was co-funded by Sky Studios.

Jon Mountague, Director of Comedy at Sky Studios said: “We’re blown away by the love our customers have shown Code 404. The winning combo of Stephen Graham, Daniel Mays and Anna Maxwell Martin has proven a force to be reckoned with and we’re ecstatic to be working on the second series.

“Code 404 becomes the latest in an exceptionally strong run of original British comedies on Sky One including Brassic 2, Breeders, Intelligence, The Trip, Avenue 5 and Hitmen. We’re privileged to be tickling the UK’s funny bone right now.”

The original comedy, written by Daniel Peak, directed by Al Campbell and produced by Charlotte Surtees, was a hit with critics as well as viewers, receiving five and four star reviews from media whilst being described as “hugely enjoyable” (The Sun) and “inducing tears of laughter” (Radio Times).

Following its debut this spring, the Sky original is already gaining interest from other broadcasters around the world, demonstrating the show’s truly international appeal. Code 404 is set to air in a number of countries including the US, where it will premiere on Peacock, NBCUniversal’s new streaming service, Russia and South Korea. NBCUniversal Global Distribution is handling international distribution on behalf of Sky Studios.

Stephen Graham and Daniel Mays star in Code 404, a new Sky original production, for Sky One, set in the in the Special Investigation Unit at the London Met.

The 6x30” police comedy series, co-produced by Water & Power Productions and Kudos, part of the Endemol Shine Group, is set in the near future and will revolve around two Detective Inspectors, DI John Major (Daniel Mays) and DI Roy Carver (Stephen Graham), who are the top crime fighting duo in the Unit. But when an undercover sting goes horribly wrong, Major is gunned down on the job and killed.

How will the SIU function without Major? It doesn’t have to. As an ‘asset’ considered too valuable to lose, Major’s body is fast-tracked into an experimental Artifical Intelligence project to bring him back from the dead. The only problem is, Major 2.0 may look like and sound like the original, but something has been lost in translation - quite a lot actually. His arrogant demeanour and gung-ho approach remain but his crimefighting instincts have completely deserted him. Somehow, Major’s error-strewn hunches and Carver’s scrambling to make good allows them to just about scrape by. But while the experiment might be hailed as a success, on the front line Roy Carver is left dealing with an increasingly deluded partner.

Tom Miller from Water & Power Productions, said: “Danny and Stephen are an electric double-act, and with Daniel Peak’s brilliant scripts we can’t wait to bring this to life for Sky One.”

Phil Temple from Kudos, said: “We couldn’t be more delighted to have such outstanding actors bringing heart and passion to these joyful scripts – this really is going to be great!”

Code 404 will be directed by Al Campbell and written by Daniel Peak. Executive producers include Tom Miller and Sam Myer for Water & Power Productions, Phil Temple and Diederick Santer for Kudos and Morwenna Gordon for Sky. The series was commissioned by Jon Mountague, Sky’s Head of Comedy and Zai Bennett, Director of Programming for Sky Entertainment UK & Ireland.

How do you feel about this latest Code 404 news? Share your thoughts with us in the comments below and don’t forget to stay tuned for all the renew/cancel 2021-2022 and beyond news!