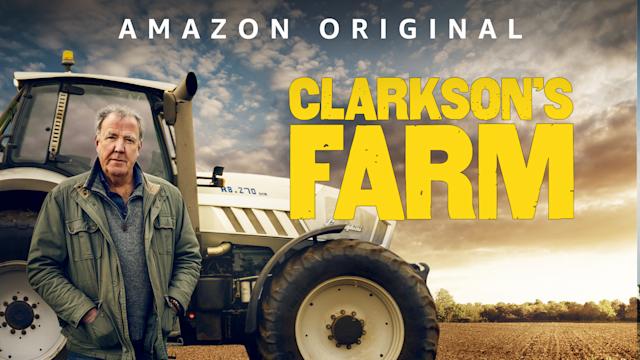 Following the launch of the critically acclaimed and customer hit series Clarkson's Farm in June, the UK Amazon Original series produced by Expectation has been rapidly renewed for a second season, and will be available exclusively on Prime Video in over 240 countries and territories

LONDON, UK - 21 July, 2021 - Amazon Prime Video will return to Clarkson's Farm for series 2, following the success of the UK Original series in June. Filming for season 2 has commenced, and the new series will launch exclusively on Prime Video in over 240 countries and territories.

Viewers can expect a deeper insight into another year on Diddly Squat Farm as Jeremy aims to diversify, expanding his limited agricultural knowledge under the watchful eye of his no-nonsense team; tractor driver Kaleb, stone wall favourite Gerald, advisor 'Cheerful' Charlie, Jeremy's better-half-turned-farm-shop-keeper Lisa and many more. Series 2 promises to bring more laughs, triumphs and tribulations, and of course more farming faux pas, as we follow Jeremy & co on their agricultural adventure.

"I'm absolutely delighted that, once again you'll be able to spend some time with Cheerful Charlie, Gerald, Lisa and of course, Kaleb," said Jeremy Clarkson. "We are such a happy team."

"Clarkson's Farm is Jeremy's unfiltered love letter to farming," said Dan Grabiner, Head of UK Originals, Amazon Studios. "It is that authenticity, charm and humour, combined with the farm's fantastic characters, which have made the series such a remarkable hit with audiences"

"We are delighted to be joining the team for another year-in-the-life of Diddly Squat, and wish Kaleb and farmers across the country luck as Mother Nature continues to take revenge on Jeremy."

The first series of Clarkson's Farm followed an intense, backbreaking and frequently hilarious year in the life of Britain's most unlikely farmer, Jeremy Clarkson. Viewers saw Clarkson and his rag-tag band of agricultural associates contend with the worst farming weather in decades, disobedient animals, unresponsive crops and an unexpected pandemic. Rated 9.2 on IMDb and 5* by Prime Video viewers, Clarkson's Farm proved popular with audiences from the get-go, with audiences and critics praising the series.

"What's winning about this series is... nearly everything. It's a sheer treat... The second episode is the funniest thing I've seen all year" - The Times

"This series is very enjoyable, the supporting players are a treat" - The Telegraph

Clarkson's Farm is produced by Expectation and Con Dao Productions for Amazon Studios, the Executive Producers are Peter Fincham and Andy Wilman and the Series Director is Will Yapp. Further details on the second series will be announced in due course.

Clarkson's Farm S2 will join the thousands of TV shows and movies in the Prime Video catalogue, including UK produced Amazon Original series such as Good Omens, The Grand Tour, All or Nothing: Tottenham Hotspur, Truth Seekers and All or Nothing: Manchester City; hit movies like Coming 2 America, Golden Globe winner and Academy Award nominee Borat Subsequent Moviefilm, the Golden Globe and Academy Award nominated movies One Night in Miami and Sound of Metal; and critically-acclaimed global Amazon Original series including Tom Clancy's Jack Ryan, The Boys, Homecoming and The Marvelous Mrs. Maisel, all available on Prime Video at no extra cost for Prime members. Prime Video also offers Prime members in the UK live coverage of Premier League football matches, Autumn Nations Cup international rugby union tournament, plus exclusive coverage of ATP Tour and US Open tennis.

Prime members will be able to watch all episodes of Clarkson's Farm S2 anywhere and anytime on the Prime Video app for smart TVs, mobile devices, Fire TV, Fire TV stick, Fire tablets, games consoles, on Virgin's V6 TV Box, the Talk Talk TV set top box, Sky Q, Apple TV, Chromecast, BT TV or online at www.amazon.co.uk/primevideo. In the Prime Video app, Prime members can download episodes on their mobile devices and tablets and watch anywhere offline at no additional cost. Prime Video is available in the UK and Ireland at no extra cost to a Prime membership for just £7.99 a month or £79 per year. New customers can find out more at amazon.co.uk/prime and subscribe to a free 30-day trial.

How do you feel about this latest Clarkson’s Farm news? Share your thoughts with us in the comments below and don’t forget to stay tuned for all the renew/cancel 2021-2022 and beyond news!