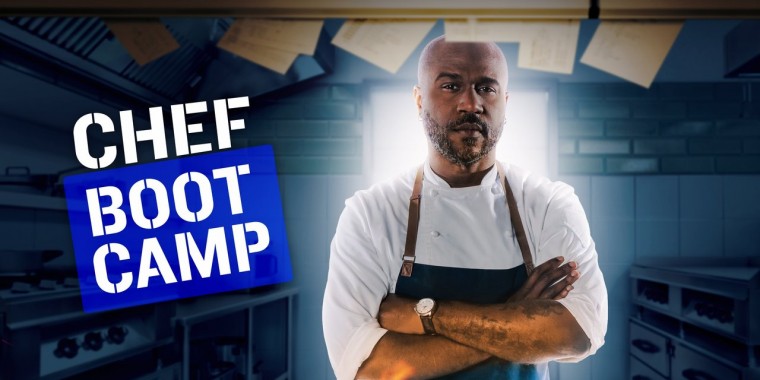 Food Network has picked up primetime series Chef Boot Camp led by charismatic culinary director Chef Cliff Crooks for an eight-episode second season, it was announced today by network president Courtney White. In season one, which premiered April 8th, Cliff is a tough yet supportive culinary drill sergeant to three struggling restaurant chefs who have been nominated by their establishment owners for their lackluster performance in the kitchen. With their jobs on the line, Cliff takes them through a series of grueling food challenges to determine who has the talent and passion to succeed and who is better off leaving the restaurant for good. Chef Boot Camp is produced by Left/Right Productions.

"Cliff is an exciting addition to Food Network - he demands a lot from those under his Chef Boot Camp tutelage and at the same time genuinely wants to inspire and re-ignite their passion for food," said White. "He is a fantastic talent who immediately resonated with our audience and we knew quickly they wanted to see more of him."

Chef Cliff Crooks has been cooking in prominent kitchens throughout New York City for more than 20 years. Prior to joining BLT Restaurant Group in 2010 as Executive Chef of BLT Steak New York, he held positions at Salute!, Blue Water Grill and Gramercy Tavern. Cliff has appeared as a contestant on Top Chef and a judge on Hell's Kitchen, Chopped Junior and Worst Cooks in America. He recently competed on Food Network's Tournament of Champions and will be seen on the upcoming series Battle of the Brothers. After more than two years of leading the kitchen at BLT Steak New York, the hospitality group's flagship restaurant, Crooks was named Culinary Director of BLT Restaurant Group and has since played an integral role in inspiring culinary growth among his staff while demonstrating a strong commitment to the brand's ethos of exceeding expectations through outstanding food and hospitality.

How do you feel about this latest Chef Boot Camp news? Share your thoughts with us in the comments below and don’t forget to stay tuned for all the renew/cancel 2021-2022 and beyond news!