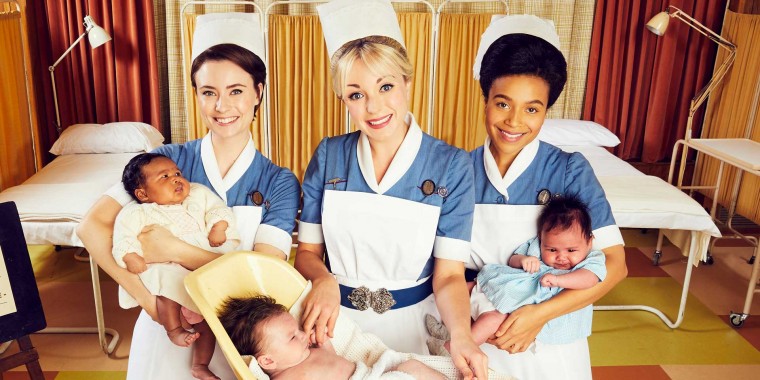 About Call The Midwife TV Show

Two more series of multiple award-winning Call The Midwife have been commissioned for BBC One.

It’s an incredible privilege to be able to look back on a decade of Call The Midwife, and yet know that our journey is still very far from over.
— Heidi Thomas
With series ten due to launch on Sunday 18 April at 8pm and series 11 about to commence filming, Call The Midwife will now be on air until 2024. Series 12 and 13, commissioned by Piers Wenger, Director of BBC Drama and Charlotte Moore, Chief Content Officer, will consist of two 8x60’ series and two Christmas specials.

Made by Neal Street Productions for BBC One and BBC iPlayer, Call The Midwife is celebrating its tenth anniversary series this year and continues to be one of Britain’s most popular and most watched drama series since it launched in 2012. The series attracts an enormous audience for BBC One, with its Christmas Specials achieving over 9 million viewers. Series nine was also the fourth biggest drama across all channels in 2020. The drama has won multiple awards across the decade for its depiction of challenging medical stories which are tackled by the nuns and midwives of Poplar.

Heidi Thomas, Creator, Writer and Executive Producer, says: “It’s an incredible privilege to be able to look back on a decade of Call The Midwife, and yet know that our journey is still very far from over. We are thrilled to be going on for a few more years! Like Nonnatus House itself, we have a proud past but an even more exciting future - full of old favourites, fresh faces, higher hemlines, new ideas. The stories we tell are like babies - they never stop coming, we love them all, and we vow to do our best by every single one.”

Pippa Harris, Executive Producer for Neal Street Productions, says: “We are all delighted by this vote of confidence from the BBC, and are looking forward to delivering more laughter, tears and babies for our loyal fans. Over the past ten years it has been an honour to see how warmly the show has been embraced by audiences around the world, thanks to the skilful writing of Heidi Thomas and the brilliant work of our cast and crew.”

Piers Wenger, Director of BBC Drama, says: “The enduring popularity of Call The Midwife is a testament to the extraordinary love and creativity from its creator Heidi Thomas and its producers Pippa Harris and Ann Tricklebank. We are delighted to have secured the future of Call The Midwife for two further series beyond those which are currently in production, and look forward to enjoying more adventures for the inhabitants of Nonnatus House for years to come."

ARLINGTON, VA (August 9, 2021) - PBS announced today that the beloved British drama CALL THE MIDWIFE will return for its 10th season Sundays, October 3- November 14, 2021 at 8:00 p.m. ET on PBS stations (check local listings). The seven-part series, commissioned in partnership with the BBC, which follows the nurses, midwives and nuns from Nonnatus House in London's East End, will air as part of PBS's Sunday night drama lineup and will stream nationally on PBS.org and the PBS Video App. Following the season finale, and in honor of the 10th season, a celebratory compilation episode, "Special Delivery," will air on November 21.

Season 10 opens in the year 1966 at a trying time for the midwives. But there is excitement too as the women's rights movement intensifies. With Trixie's (Helen George) help, Sister Julienne (Jenny Agutter) is determined to steer Nonnatus House out of its financial quandary. Dr. Turner (Stephen McGann) deals with an array of difficult cases, including a former soldier involved in nuclear test explosions.

Meanwhile, Sister Monica Joan (Judy Parfitt) experiences a crisis of faith, and Sister Frances (Ella Bruccoleri) realizes she needs to be a little less spiritual to really connect with the local women. Nonnatus House also welcomes four new pupil midwives, including Nancy Corrigan (Megan Cusack), who makes quite an impression. There are some interesting challenges ahead, as well as great celebrations when England wins the World Cup.

"PBS is thrilled to bring the landmark tenth season of CALL THE MIDWIFE to its passionate fanbase in the U.S.," says Maria Bruno Ruiz, Vice President of Program Scheduling for PBS. "The series has become a Sunday night staple to viewers over the last decade thanks to the talent and creativity of the many women behind and in front of the camera, who've continued to find thoughtful ways to tell important stories about birth, death, love and community."

"Over the past 10 years it has been an honor to see how adored the show is by audiences around the world, thanks to the talented Heidi Thomas and the brilliant work of our cast and crew," says Pippa Harris, Executive Producer for Neal Street Productions." We are excited for viewers across the pond to be swept up in the moving storylines of Nonnatus House and embrace much loved characters and welcome new ones too."

To celebrate the series' 10th anniversary, Weldon Owen will release A Labour of Love: Ten Years of Call The Midwife on November 2, 2021. Written by Stephen McGann, who plays Dr. Patrick Turner on the series, the book explores the moving and personal story of CALL THE MIDWIFE as told by the cast and crew.

CALL THE MIDWIFE is created and written by Heidi Thomas; Executive Producers are Pippa Harris, Heidi Thomas and Ann Tricklebank. The series is a Neal Street Production for BBC/PBS and is distributed internationally by BBC Studios in addition to the previous nine hit seasons.

Wondering how your other BBC One, PBS shows are doing? Check out the BBC One, PBS 2021 TV scorecard page, where you can find the cancel/renew status of all BBC One, PBS TV shows!

How do you feel about this latest Call The Midwife news? Share your thoughts with us in the comments below and don’t forget to stay tuned for all the renew/cancel 2021-2022 and beyond news!