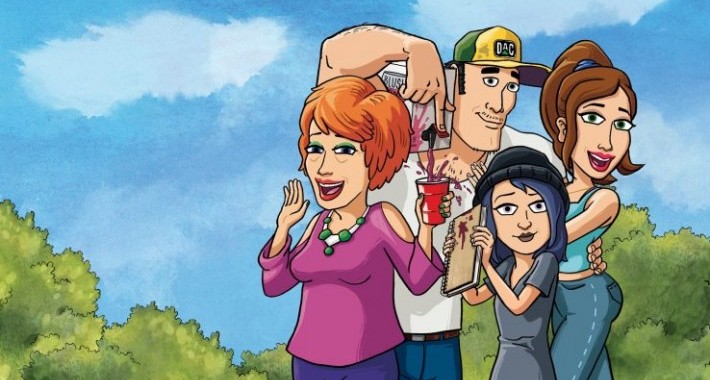 FOX is no longer blessing the Harts.

The network has cancelled Bless The Harts after two seasons, having decided not to pick up the animated series for Season 3.

About Bless The Harts TV Show

Created and executive-produced by Emmy Award winner Emily Spivey (“The Last Man on Earth,” “Parks and Recreation,” “Saturday Night Live”), BLESS THE HARTS is a new half-hour animated comedy that follows the Harts, a Southern family that is always broke, and forever struggling to make ends meet. They one day hope to achieve the American dream, but they’re already rich – in friends, family and laughter. JENNY HART (Academy Award and Golden Globe nominee Kristen Wiig, “Bridesmaids,” “Saturday Night Live”) is a single mother supporting her family working as a waitress in the small town of Greenpoint, NC. While Jenny’s the head of her family, she’s often at odds with, or scheming with, her lottery scratcher-obsessed mother, BETTY (Emmy Award and Screen Actors Guild Award nominee Maya Rudolph, “The Good Place,” “Bridesmaids”), and her witty, creative daughter, VIOLET (Emmy Award nominee Jillian Bell, “Workaholics,” “Fist Fight”). Jenny’s doting, eternal optimist boyfriend of 10 years, WAYNE EDWARDS (Ike Barinholtz, “Neighbors,” “Blockers”), is the love of her life and a surrogate father to Violet. He’s a charming dreamer who may never hit the big time, but he’s not going to give up the fight. In the end, the Harts may not have much, but they may just have everything they need.

"Emily Spivey has the uncanny ability to observe the simplest qualities of everyday life, framing together bold characters and hilarious stories built around warmth and heart," said Michael Thorn, President, Entertainment, Fox Broadcasting Company.
"Having grown up in a close-knit southern family, she has a deep well of material that has inspired her to create this show, with a phenomenal cast, headlined by Kristen, Maya, Jillian and Ike. As home to television's most iconic animated families - the Simpsons, Griffins and Belchers - we're thrilled to welcome the Harts to FOX."

BLESS THE HARTS follows a group of Southerners who are always broke as a joke, and struggling for the American dream of status and wealth. What they don't realize is that they're already rich, in friends, family and laughter.

Lord and Miller, who previously worked with Spivey on their series, "The Last Man on Earth," will produce this project through their Lord Miller Productions banner, with the company's Aubrey Lee overseeing the project. The celebrated multi-hyphenate duo continue to ramp up their slate in both television and film. Up next for Lord and Miller on the film side will be the upcoming "Spider-Man: Into the Spider-Verse," which will hit theaters this December, and "The LEGO Movie 2: The Second Part," slated for release in February 2019. They are repped at UTA and Ziffren Brittenham.

How do you feel about this latest Bless The Harts news? Share your thoughts with us in the comments below and don’t forget to stay tuned for all the renew/cancel 2021-2022 and beyond news!