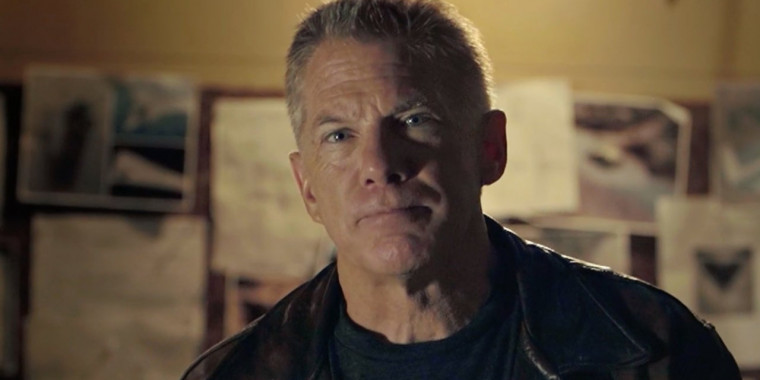 Every year, there are billions of dollars allocated to clandestine government programs around the world known as the 'black budget.' Each individual operation is known as a Black File, and each is shrouded in secrecy and mystery. What are these classified government programs? What is their purpose, and what do they reveal about our world? In an all-new season of BLACK FILES DECLASSIFIED, former CIA operative, Mike Baker, follows the money trail each week to reveal the many secrets at the core of these Black Files and pull back the curtain on the secret government programs that sometimes sound more like science fiction than truth.

With unprecedented access, Mike is able to dig into these top-secret government programs steeped in cutting edge science and conduct his own research by speaking with experts, journalists, and former government and Black File officials.

This season, Mike will explore a top-secret aerospace program that, according to recently uncovered documents, has been involved in investigations into the paranormal such as werewolves, ghosts, cattle mutilations and more. When the US Navy recently confirmed the existence of a covert group investigating unknown aerial phenomena, AATIP, or the Advanced Aerial Threat Identification Program became front page news. But there is a much more secretive and equally shadowy precursor to AATIP known as AAWSAP, or the Advanced Aerospace Weapon Systems Applications Program. Their focus was firmly on what can only be termed as "the real-life X Files." But how and why was our government investigating such phenomena? And how does it affect the safety of our nation?

Also this season, Mike investigates what's been called one of America's best kept secrets - a list of emergency powers the President has at their disposal during extreme events like nuclear war or governmental collapse. Recently, there have been calls in Congress to limit the powers coming from a Black File called PEADS, short for 'Presidential Emergency Action Documents.' These highly secretive documents confer extraordinary and unlimited Presidential powers during "Acts of Wartime" without any congressional approval or oversight. What are the scenarios that trigger PEADS and what powers do they contain?

Each week, BLACK FILES DECLASSIFIED will seek out the truth behind some of the world's most intriguing secret operations. From unraveling the mystery behind a sighting of the famous Black Budget funded squadron known as the Red Eagles 30 years after they were decommissioned, to exploring one of the most daring Black Budget funded special operations in history known only as Mission 7, each week Mike will choose another truth to seek behind some of the world's greatest mysteries.

With unprecedented access, Mike will look at different top-secret government program steeped in cutting edge science. Conducting his own research, speaking with journalists, experts, former government and black file officials and scientists, he'll stop at nothing to delve deeper into these black files than has ever been done before.

In the first episode, Mike will explore a top-secret aviation program funded by a mysterious money trail that could revolutionize flight transportation by attaining Mach 5 speeds, nearly 4,000 mph. But could this hypersonic speed technology fall into the wrong hands? Mike delves into the black files and explores how a few nations are working on hypersonic missiles, capable of reaching their target in minutes and completely unstoppable.

In another episode, Mike digs into another clandestine program, investigating the credible sources of alien sightings and a program dedicated to researching, tracking and identifying UFOs. Even within the government, most don't know about the program. Are they capturing hostile spy craft? Testing out latest technology? Or could it be something else? A series of recently released videos filmed by the Department of Defense show a technology that scientists and aviation experts agree is beyond our capability and very possibly, something from beyond our world. Mike Baker looks into one of the most fascinating subjects of our time.

Each week, BLACK FILES DECLASSIFIED will seek out the truth behind some of the world's most intriguing mysteries. From a space-based military program to an undefeatable army with superhuman strength and the ability to kill with their minds, Mike will pull back the curtain on the programs that sound more like science fiction than truth.

How do you feel about this latest Black Files Declassified news? Share your thoughts with us in the comments below and don’t forget to stay tuned for all the renew/cancel 2021-2022 and beyond news!