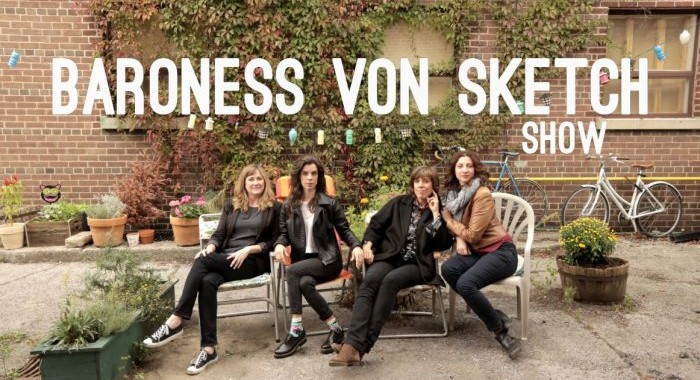 CBC has announced that the previously-set fifth season of Baroness von Sketch Show will be the last in the series.

The news means that Baroness von Sketch Show has been cancelled ahead of the fifth (and now final) season, which is slated to premiere in fall 2020.

See the announcement below:

The Baronesses shared the following statement regarding their “decision” (aka their response to the cancellation):

After five fantastic years, we have decided that Season 5 of Baroness von Sketch Show will be our last. We are so grateful to have been given the opportunity to share our deepest embarrassments, existential angst and daily observations with you, our fans.

“Baroness von Sketch Show broke new ground with their cutting edge sketch comedy, capturing audiences and acclaim in Canada and the U.S.,” said Sally Catto, General Manager of Entertainment, Factual and Sports, CBC. “Season after season, their sketches have continued to be clever and bold, and reflect the perspectives and experiences of women in refreshingly authentic new ways. Jennifer, Carolyn, Aurora and Meredith have changed the landscape of Canadian comedy forever, and we are so very proud of their achievement.”

“We are immensely proud of Baroness von Sketch Show and know that the series will be enjoyed by millions of people for years to come,” said Jamie Brown, Frantic Films, CEO and Baroness Executive Producer. “We were lucky to discover this dream team of fantastic writers and performers whose creativity knew no bounds over five fantastic seasons.”

BARONESS VON SKETCH SHOW is currently nominated for five Canadian Screen Awards including Best Sketch Comedy Show & Ensemble Performance, Best Direction and Best Writing. Winners for these categories will be announced virtually on Wednesday, May 27 beginning at 7 p.m. ET. The virtual presentation will be live-streamed on the Canadian Academy Facebook, Twitter, and YouTube channels, as well as at academy.ca.

Canadians looking to revisit Seasons 1-4 of BARONESS VON SKETCH SHOW before the premiere of the fifth and final season this fall can watch on the free CBC Gem streaming service.

The series is also broadcast on IFC in the U.S.

IFC's all-female sketch series Baroness von Sketch Show, which provides an insightful, satirical look at our everyday modern lives, has been picked up for a season five. The award-winning series is performed and written by Carolyn Taylor, Meredith MacNeill, Aurora Browne and Jennifer Whalen. Fast-paced and irreverent, the series celebrates the absurd and mines the embarrassing, offering a fresh, witty take on relatable moments such as crying at work, waiting in airport security lines, dealing with gossip-obsessed co-workers, co-parenting and more. Baroness von Sketch Show is executive produced by Jamie Brown, Taylor, MacNeill, Browne and Whalen, who also serves as showrunner.

Wondering how your other CBC, IFC shows are doing? Check out the CBC, IFC 2021 TV scorecard page, where you can find the cancel/renew status of all CBC, IFC TV shows!

How do you feel about this latest Baroness von Sketch Show news? Share your thoughts with us in the comments below and don’t forget to stay tuned for all the renew/cancel 2021-2022 and beyond news!