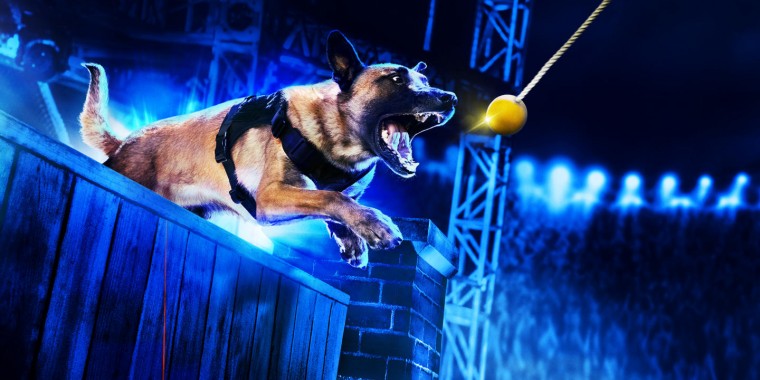 In each one-hour episode, "America's Top Dog" features furry friends alongside their handlers facing off on a massive canine obstacle course designed to test their speed, agility, teamwork, and trust as they navigate a series of challenges over two rounds of competition. Award-winning veteran studio and sports broadcaster Curt Menefee ("FOX NFL Sunday," "The OT") and actor and comedian David Koechner ("Anchorman," "The Office") serve as hosts and break down the action, while sideline reporter Rachel Bonnetta (FOX Sports, "FOX Bet Live") catches up with the teams down on the course.

Season two introduces a new format with head-to-head match ups, pitting a pup against another competitor in their class across working dogs, police K9s and "underdogs," for an epic battle to prove who is best. The winners of each of the three classes face-off head-to-head to determine who is that week's Top Dog. Each week, the winning team will receive a $10,000 cash prize as well as an additional $5,000 to donate to the animal charity of their choice. In the final week of competition, the winning teams return for the ultimate face off for the title of "America's Top Dog" and an additional $25,000. The competition continues across season three with even more breeds, high-stakes and new rules.

Also hosted by Curt Menefee, "An Animal Saved My Life" showcases amazing acts of heroism from different kinds of animal heroes. Featuring stories ripped from the headlines, viral videos, surveillance footage and interviews with people who have been saved by animal heroes, the series highlights scares and saves that range from heartwarming to adrenaline pumping. Pet owners overwhelmingly think of their cats and dogs as family members who provide emotional support and love, but sometimes animals risk it all to save a human life.

In each one-hour episode of "America's Top Dog," four police K9 teams, including fan-favorites from the hit series "Live PD," and one civilian team will face off for the title of "Top Dog" in three rounds of high velocity, furry competition. The skilled teams will be tested on their speed, agility, scenting ability, and teamwork by completing a series of expert tasks on one of the biggest and toughest K9 obstacle courses ever assembled - designed by experts to mimic real-life challenges that these furry heroes face every day on the beat. Teams will navigate a complex maze to locate scented items and apprehend a suspect in a bite suit with a takedown, among a variety of other challenges. Each week's winning team will receive $10,000 and an additional $5,000 to donate to the animal charity of their choice. In the final week of competition, top competitors will return to the finale course to battle for the title of "America's Top Dog" and an additional $25,000 cash prize.

Series host Curt Menefee is an award-winning veteran studio and game broadcaster who currently co-hosts "Fox NFL Sunday" in addition to wrap-up show "The OT." Alongside Menefee, expert trainer Nick White is both a former US Marine and member of the Secret Service with years of experience working with K9s as the owner of a dog training company with locations across the country. Menefee and White watch the action unfold on the course each week and provide in-depth explanation on the competition rounds. Jamie Little is a seasoned motor sports reporter covering the pit road for FOX NASCAR, as well as an animal rescue ambassador who served as a reporter at the 2019 Westminster Kennel Club Dog Show. Little acts as sideline reporter on the course speaking with the teams as they make their way through the competition.

How do you feel about this latest America’s Top Dog news? Share your thoughts with us in the comments below and don’t forget to stay tuned for all the renew/cancel 2021-2022 and beyond news!