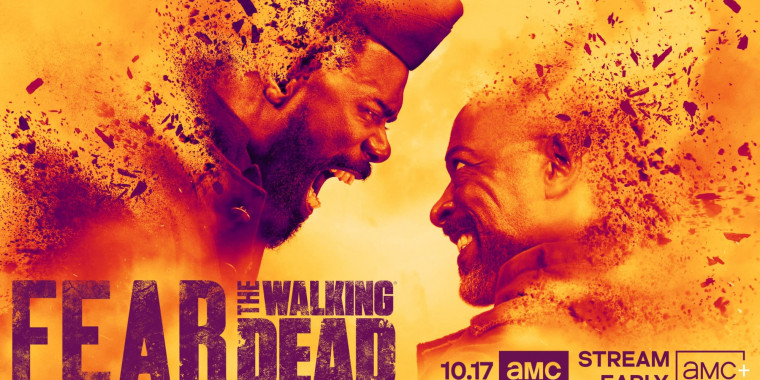 New York, NY, March 23, 2021 – For the month of April, AMC+ offers subscribers a wide variety of critically acclaimed and commercial-free programming, including compelling new dramas, fan-favorite franchises, and film collections from across the company’s entertainment networks and targeted streaming services.

Highlights for the month include:

Early access to the second half of Fear the Walking Dead’s season 6 premiering Sunday, April 4 ahead of the premiere on AMC on Sunday, April 11, with subsequent new episodes available to subscribers every Thursday beginning April 15.

Indulge in all things horror during Shudder’s Halfway to Halloween Month featuring:

Season 2 of the hit horror anthology Creepshow on Thursday, April 1;

Season 3 of The Last Drive-in with Joe Bob Briggs available every Sunday on-demand beginning Sunday, April 18 following Shudder’s live stream of the episodes on Fridays; and

The largest curated horror fare including a library of cult classic favorites from the Halloween franchise to the Underworld films.

A full April schedule is below (in chronological order):

An exclusive re-watch of Season 10C featuring never-before-seen interviews from the cast and creators, with new episodes available every Thursday.

SundanceTV’s critically acclaimed series follows the life of Daniel Holden (Aden Young), recently released from prison after serving nearly 20 years on death row for the rape and murder his teenaged girlfriend. When DNA evidence casts doubt on his conviction, he returns home but is far from welcomed.

The acclaimed Sundance Now period drama about the pilots and flight attendants in the early1960s who once made Pan Am the most glamorous way to fly.

Four years after South Korea’s total decimation in Train to Busan, the zombie thriller that captivated audiences worldwide, acclaimed director Yeon Sang-ho brings us Peninsula, the next nail-biting chapter in his post-apocalyptic world. Jung-seok, a soldier who previously escaped the diseased wasteland, relives the horror when assigned to a covert operation with two simple objectives: retrieve and survive. When his team unexpectedly stumbles upon survivors, their lives will depend on whether the best – or worst – of human nature prevails. **A Shudder Exclusive Film

In the 2018 film starring Rooney Mara and Joaquin Phoenix, this incredible story of Mary Magdalene is told through her own eyes, as the sole women among Jesus’s band of disciples. Defying the prejudices of a patriarchal society as she undergoes a profound and spiritual awakening, Mary finds herself at the center of an earth-shaking historical moment. **IFC Films Unlimited

From award-winning director Wim Wenders, a 3-D feature-length and Academy Award(R)-nominated documentary dance film with the ensemble of the Tanztheater Wuppertal Pina Bausch, Pina features the unique and inspiring art of the great German choreographer, who died in the summer of 2009. ** IFC Films Unlimited

Fear the Walking Dead – Early Access to Season 6B Premieres Sunday, April 4, One Week Ahead of AMC’s Premiere on April 11

As Morgan’s (Lennie James) bid to free the remaining members of the group becomes bolder, Virginia (Colby Minifie) grows increasingly desperate to find her sister and protect the settlements from forces working inside and outside her walls. The second half of Season 6 reveals the impact of what living under Virginia’s control has done to each person in this group, who once saw themselves as a family. New alliances will be formed, relationships will be destroyed, and loyalties forever changed. Subsequent episodes will be available on Thursdays, beginning April 15.

In the fourth and final season of SundanceTV’s Rectify, Daniel is now in Nashville to start his new life and tries to find a way to cope with his past and forge a “normal” life and how that affects his family and the citizens of Paulie.

A Sundance Now Exclusive Series centered on the titillating lives of the wives and girlfriends of renowned athletes. The second season continues with new episodes every Thursday and the season finale airing April 8.

As striking miners switch off the power across Britain, rolling electrical blackouts plunge the country into darkness. Val, a young nurse on her first day of duty, is forced to work the night shift in a crumbling hospital. When most of the patients and staff are evacuated to another hospital across town, Val finds herself in a near empty building, enveloped by a sinister darkness. **A Shudder Exclusive Film

AMC+ Original starring Dominic Cooper (Preacher) as an English spy who is sent to Berlin in 1961 to sift out a traitor in the UK Embassy or among the Allies, shortly before the construction of the Berlin Wall. The city, declared by Soviet leader Nikita Khrushchev as “the most dangerous place on earth,” is teeming with spies and double agents, and one wrong move could trigger the threat of nuclear war as American, British and French troops in West Berlin remain separated from their Soviet and East German counterparts by nothing more than an imaginary line.

Based on the award-winning and best-selling novels from Finnish journalist Pekka Hiltunen, AMC+ Exclusive series, Cold Courage follows two women as they collide during a series of murders in present-day London. As they are drawn together through a clandestine group called the “Studio,” they seek to right the wrongs of the powerful, influential and corrupt – starting with a dangerous, charismatic politician (John Simm) looking to put the ‘Great’ back into Great Britain. New episodes continue to debut every Thursday with the season finale premiering Thursday, April 15.

From acclaimed genre director Chris Smith (Creep, Severance), comes The Banishing which tells the true story of the most haunted house in England. A young reverend and his wife and daughter move into a manor with a horrifying secret. When a vengeful spirit haunts the little girl and threatens to tear the family apart, the reverend and his wife are forced to confront their beliefs. **A Shudder Original Film

BBC AMERICA’s stunning, modern natural history series embarks on a 24-hour journey with the most extraordinary animals on our planet as they thrive at different moments in the day to survive in some of the toughest landscapes. For some animals 24 hours is the blink of an eye – for others, it’s an entire lifetime.

Shudder’s hit original series returns with Joe Bob Briggs, the world’s foremost drive-in movie critic, presenting eclectic horror movie double features, interrupting the films to expound upon their merits, histories and significance to genre cinema. The show’s hashtag, #TheLastDriveIn, has trended in the top 10 on Twitter in the US during the premiere of every episode and special, often reaching No. 1. Episodes will be available on-demand on AMC+ every Sunday following the live stream on Shudder on Fridays.

New episodes of the AMC series feature The Walking Dead star and motorcycle enthusiast Norman Reedus as he hits the open road on a three-day, two-wheel adventure exploring local culture and meeting the people who help shape and influence their communities.

In season 2 of the Sundance Now series, a serial killer targets a group of men connected to a historic sexual assault. Detective Sergeant Gina Jenkins leads a manhunt and reveals the killer’s motives to punish a gang of friends ten years after their terrible crime, but Gina’s efforts are complicated by the return of her younger brother from prison.

Six Mile Hill is a sleepy Irish backwater whose only claim to fame is the local legend that Bram Stoker once spent a night in the town pub and is where tourists visit the gravesite of Abhartach, a legendary Irish vampire some believe inspired ‘Dracula.’ It’s home to Eugene Moffat, a young man working on the site of a controversial new road development that threatens to destroy the town’s livelihood. Strange events unfold when Eugene and crew tear down a famous cairn believed to be the final resting place of Abhartach, and they come under attack from a sinister force. **Shudder Exclusive Film

New episodes of BBC AMERICA’s The Graham Norton Show continue every Friday, with the season finale on Friday, April 23.

Friday, April 16 – Guests to be announced.

Friday, April 23 – Guests to be announced.

In the fourth season at the wheel of BBC AMERCA’s Top Gear, hosts Freddie Flintoff, Chris Harris and Paddy McGuinness hit the road again in a series of challenges designed to push them and their cars to the limit. This season sees the trio tackling the thorny issue of ‘mid-life crisis’ cars, heading to the Scottish Highlands on a punishing off-road adventure, celebrating and driving some of the most iconic cars from the James Bond films, and more. Plus, reviews of the new Toyota Yaris GR, the Ferrari Roma and more.

Building on the hit 2019 superdoc, In Search of Darkness: Part II dives deeper into the fabled practical-effects decade of iconic and eclectic ’80s horror movies that changed the course of film history. Packed with over four hours of brand-new interviews, including such legendary horror icons as Robert Englund (A Nightmare on Elm Street), Nancy Allen (Dressed to Kill), Linnea Quigley (The Return of the Living Dead), and special-effects wizard Tom Savini (Friday the 13th), Part II features 15 new faces alongside 40-plus returning members of the original In Search of Darkness cast. **A Shudder Exclusive Documentary

Devastated by his daughter’s death in a terrible accident, a man becomes convinced that he can bring her back through a secret that is hidden within a recurring dream. **IFC Films Unlimited

This crime drama tells the story of two brothers from a dysfunctional family who have raised themselves up from the desperate days of their early childhood, only to have their newly ordered lives begin to fall apart when one becomes a suspect in a murder. *Sundance Now Exclusive Series

An anthology of six interconnected horror short films, Deadhouse Dark is anchored by a woman who receives a ‘mystery box’ from the dark web, each item within it gradually unveiling a dark and troubling truth. **Shudder Original Anthology

Teddy (John Glover) brought about his vision of "The End" when he detonated nuclear warheads across the Texas landscape, but it will be up to those who survived to decide what "The Beginning" will look like. And they'll have to do it in a world devoid of light and hope, where the outside air is just as deadly as the walkers they face. The survivors will find out who they really are and what they're really made of. Some will rise to the occasion, some will find new purpose, and some will redefine themselves -- even if it comes at a terrible cost to those they once considered family.

Living in the same universe as The Walking Dead, Fear the Walking Dead is a gritty drama that explores the onset of the undead apocalypse through the lens of a fractured family. Set in a city where people come to escape, shield secrets, and bury their pasts, a mysterious outbreak threatens to disrupt what little stability high school guidance counselor Madison Clark and English teacher Travis Manawa have managed to assemble. The everyday pressure of blending two families while dealing with resentful, escapist, and strung out children takes a back seat when society begins to break down. A forced evolution, a necessary survival of the fittest takes hold, and our dysfunctional family must either reinvent themselves or embrace their darker histories.

How do you feel about this latest Fear The Walking Dead news? Share your thoughts with us in the comments below and don’t forget to stay tuned for all the renew/cancel 2021-2022 and beyond news!