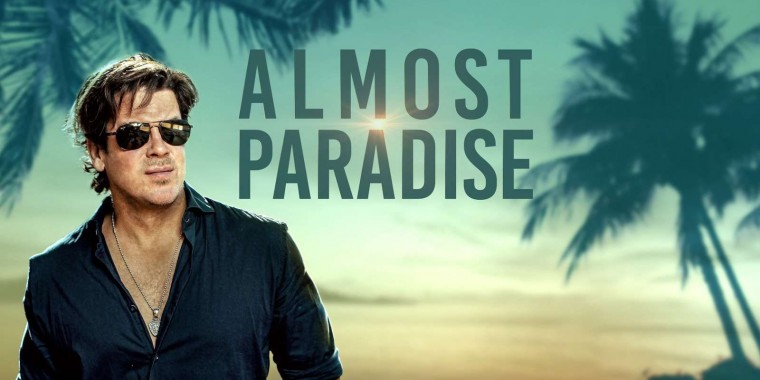 It’s almost paradise, but not quite.

The cabler has opted not to move forward with Season 2 of the crime drama citing a “directional shift in programming,” insiders inform Cancelled Soon TV.

Series creator Dean Devlin further confirmed the cancellation of the series in a statement provided to Cancelled Soon TV:

“A lot of people have been asking about season two so I want to tell everybody what’s happening with our show. Just so everyone knows we will not be back on WGN next year. WGN has decided to change into an all-news network. We are grateful to WGN for launching our show and for getting us up and running and giving us a place to show the show to everyone. So, thank you for that opportunity.

Despite the WGN cancellation, Devlin is hopeful Almost Paradise Season 2 can still happen on another platform:

“I can’t name the platform yet because the ink isn’t dry on the contract but, this July, all of the original episodes will appear in a new place and that place will be for free so everyone will be able to watch it for free.

And, they have sworn to me that, if we do well enough, if we perform really well in those first couple months, they will pick up season two and continue the show. We will announce at some point where that new platform is.”

“If we do well, we will be back for season two and nothing would make me happier. I can’t imagine any show that I’ve ever worked on being more fun than this one. Again, thank you, everyone, for a wonderful season.”

IMDb TV, Amazon's free streaming service, announced today the Season Two pickup of the action series Almost Paradise, created by Dean Devlin and Gary Rosen, who will also serve as co-showrunners. The drama follows Alex Walker (Christian Kane, Leverage: Redemption), a former U.S. DEA agent who, after his partner's betrayal and a life-threatening battle with hypertension, is forced into early retirement and relocates to a small tropical island in the Philippines. Currently, Season One of Almost Paradise is exclusively available to stream on-demand on IMDb TV in the U.S.

Once the DEA's most resourceful undercover operative, Walker now runs the gift shop in the island's luxury resort hotel. While he manages to transition from top DEA agent to laid-back islander, the luxury resort has attracted the rich, powerful - and sometimes criminal - elite from around the world, often on a collision course with Alex. Despite his best efforts to begin a tranquil new life, he's pulled back into a world of dangerous people and deadly situations, either through his friends in the local police, Kai Mendoza (Samantha Richelle, Syd) and Ernesto Alamares (Arthur Acuña, The Bourne Legacy), or running into people from his old life. And the problem is, he likes it.

Alex Walker, a former US DEA agent who was forced into early retirement. Once the DEA’s most resourceful undercover operative, the combination of his partner’s betrayal and a life-threatening battle with hypertension has sent him as far from the madness as he can go… a small tropical island in the Philippine Archipelago. He now runs the gift shop at the island’s luxury resort hotel, gets his disability payments at the nearby US Air Force base, and generally manages his transition from Jason Bourne to Jimmy Buffett. BUT, the island’s luxury resorts attract rich, powerful, and sometimes criminal elite from around the world, often on a collision course with Alex. Despite his best efforts to begin a tranquil new life, he’s pulled back into a world of dangerous people and deadly situations, either through his friends in the local police department or running into people from his old life. And the problem is: he likes it.

How do you feel about this latest Almost Paradise news? Share your thoughts with us in the comments below and don’t forget to stay tuned for all the renew/cancel 2021-2022 and beyond news!