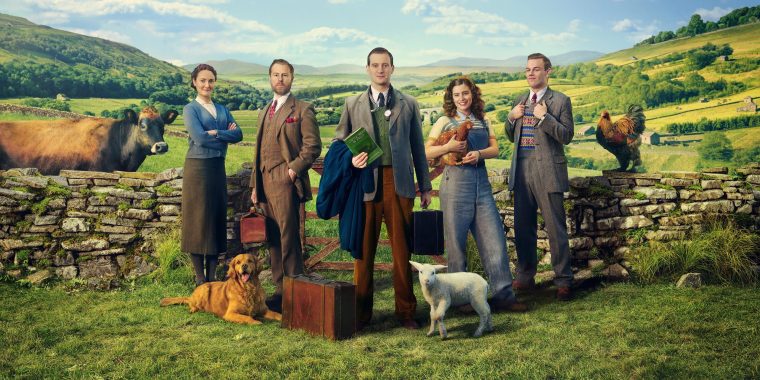 All Creatures Great and Small has a longer future ahead of it.

Channel 5 and PBS has further renewed the British veterinarian drama for Season 4, following the leaked Season 3 renewal in November.

Said producer Playground Entertainment of the All Creatures Great and Small Season 3 and 4 renewal:

“Everyone at Playground wants to thank ‘Masterpiece’ on PBS, Channel 5 and All3Media International for their support for the series. But most of all we want to thank the audience who have so fully embraced the new series. It is their vocal and loyal support that has resulted in this ongoing commitment to the series and we couldn’t be more delighted. It is a joy to produce the show but an even bigger joy to know that there is an audience all over the world hungry to revisit the world of Darrowby in the beautiful Yorkshire Dales and to spend more time with the wonderful inhabitants of Skeldale House.”

About All Creatures Great And Small TV Show

All Creatures Great and Small Seasons 3 and 4 coming soon.

"I do love it here. The place. The work. The people... " Your favorite Yorkshire Dales residents return for another heartwarming season based on the life and novels of James Herriot. Season 2 will premiere on MASTERPIECE in Winter 2022.

MASTERPIECE on PBS will co-produce All Creatures Great and Small, a brand new adaptation based on best-selling author James Herriot’s cherished and iconic collection of stories. The series is a production from BAFTA and Golden Globe®-winning production company Playground (Howards End, Wolf Hall). Channel 5 in the UK commissioned the series and All3Media will distribute internationally. The production will also receive funding and support from Screen Yorkshire.

All Creatures Great and Small will shoot on location in Yorkshire, England, as 2020 sees the 50th anniversary of the original publication of the much-loved books.

The production, a six-part series plus a Christmas special, will be produced by Richard Burrell (New Tricks, Silent Witness). Executive Producers are Colin Callender and Melissa Gallant for Playground, Hugo Heppell for Screen Yorkshire and Rebecca Eaton for MASTERPIECE. MASTERPIECE on PBS is presented by WGBH Boston. Ben Vanstone (The Last Kingdom) is lead writer and Executive Producer and Brian Percival (Downton Abbey) is lead director.

Since their first publication in 1970, the beloved books of James Alfred Wight, published under the pen name James Herriot, have held a special place in people’s hearts throughout the world. Chronicling the heartwarming and humorous adventures of a young country vet, the books introduced readers to his unconventional mentor and the cast of farmers and townsfolk who lived and worked in the Yorkshire Dales in the 1930s. This new adaptation will preserve the rich spirit, tone and values of Herriot’s iconic characters and stories and will bring to life his sharply observed, entertaining and incredibly funny tales of country life in the North of England for a modern audience, introducing a new generation to his life-affirming stories.

“Revisiting James Herriot’s beloved stories is an immense privilege and we are honored that Alf Wight’s family have entrusted us with his legacy. It is a responsibility we take very seriously,” says Colin Callender, Executive Producer and CEO of Playground. “At a time when the country feels more divided than ever, Herriot’s glorious books remind us how to connect and belong again. The series will embrace the fun and the nostalgia of revisiting the England of the past, while celebrating Herriot’s values that, despite all our current upheaval, still underpin British life today.”

“When it originally aired on public broadcasting, All Creatures Great and Small captured the hearts of millions of television viewers,” says Rebecca Eaton, Executive Producer of MASTERPIECE. “We promise that the new series will have all the wit, warmth, and quirky charm of the original – and of course, lots of irresistible animals.”

Sebastian Cardwell, Channel 5 commented: “James Herriot has a special place in the heart of the public and the commission of this iconic drama series, against the stunning backdrop of the Yorkshire Dales, is set to bring joy to a new army of TV viewers. The original books affectionately captured a unique slice of British life; in challenging times, we hope the charming and heart-warming stories of community and compassion will resonate with new audiences.”

Executive Producer Hugo Heppell, Head of Investments at Screen Yorkshire, says:“People all over the world know Yorkshire through James Herriot and All Creatures Great and Small and we are thrilled to see the warmth, the down to earth wit and the generosity of spirit that infuse his stories brought back to the screen for a new generation.’’

Never out of print, the books have sold 60 million copies internationally becoming a global cultural phenomenon with devoted fans around the world. Their focus on community and its importance in our lives gives Herriot’s work an enduring power and contemporary resonance that reminds us all that belonging to a community makes us part of something greater than ourselves.

James Alfred Wight OBE FRCVS was a veterinary surgeon who graduated from Glasgow Veterinary College at the age of 23. He headed to a veterinary practice in Thirsk, Yorkshire, in 1940 where he fell in love with the Dales and the woman he would marry, Joan Danbury. Wight later wrote stories based on his own adventures as a young country vet, under the pen name James Herriot. Herriot quickly became one of Britain’s best-loved authors.

Jim Wight and Rosie Page, Wight’s children, say: “The books of James Herriot have enchanted millions of readers worldwide for almost half a century. We are delighted that our father’s work will be brought to life once again for a new generation of viewers Great and Small.”

All Creatures Great and Small is a timeless classic that continues to be loved by generations. The collected works of All Creatures Great and Small is comprised of Herriot’s debut novel If Only They Could Talk, originally published in the UK in 1970, and its follow-up It Shouldn’t Happen to A Vet. Herriot went on to write over a dozen subsequent stories and collections which have gone on to sell millions of copies internationally.

How do you feel about this latest All Creatures Great And Small news? Share your thoughts with us in the comments below and don’t forget to stay tuned for all the renew/cancel 2021-2022 and beyond news!