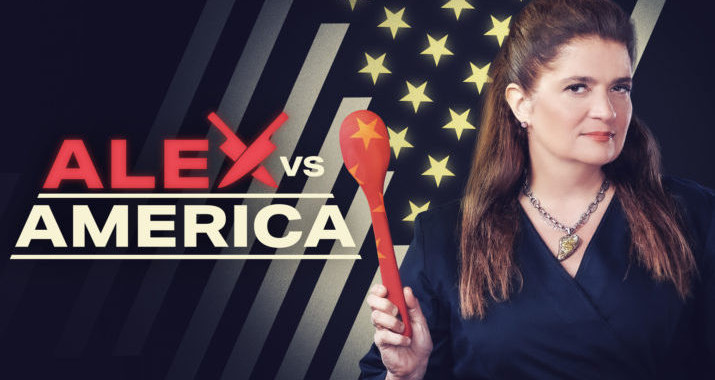 Food Network Viewers Can Also Watch Alex on Chopped, The Kitchen, and Return of Supermarket Stakeout

About Alex vs America TV Show

Food Network Viewers Can Also Watch Alex on Chopped, The Kitchen, and Return of Supermarket Stakeout

Food Network's hit freshman series, Alex vs America, received a season two pick-up just ahead of the network's TCA panel featuring acclaimed chef Alex Guarnaschelli. Alex is an Iron Chef and Food Network staple, entertaining millions of viewers each week as a judge on Chopped, co-host of The Kitchen, and leading the fun on Supermarket Stakeout. On Alex vs America, Alex shares her competitive side as one of the most accomplished chefs in any culinary arena, as she takes on three brave chefs per episode. Heading into the finale, Alex vs America has been seen by nearly 6M P2+ viewers. On average, the series has ranked as the #2 cable program among P25-54 and W25-54 within its Sunday 10pm timeslot, a +78% increase vs the prior six-weeks, and +28% vs Food Network's 2021 freshman premiere average.

"Alex vs America has become must-see programming for Food Network viewers, featuring Alex's full arsenal of talent on display with her sharp wit, raw authenticity, and culinary competitiveness. We are thrilled to have Alex step back into the arena for a new season, and with new episodes of Supermarket Stakeout, Chopped and The Kitchen, audiences are reminded why Alex is one of the most revered chefs today," said Courtney White, President, Food Network and Streaming Food Content, Discovery Inc.

Hosted by renowned chef Eric Adjepong, each episode of Alex vs America features three culinary superstars competing over two rounds against Alex and each other. The competitors hail from different states, but they all share the same mastery of a specific ingredient or dish, one that they have spent endless hours in their own kitchens perfecting and which will be tested in an effort to take down Alex. At the start of each battle, Alex and the competitors learn their challenge, with the chefs having the ability to work together in selecting variables for their dishes as well as the amount of time they give themselves and Alex to cook with. Each finished plate will undergo a blind tasting, with only the top three chefs advancing and the least successful from the challenge being immediately sent home - even if it is Alex! In the end, it all comes down to what's on the plate. Will the final two chefs outcook Alex, earning bragging rights and a cash prize? All episodes of Alex vs America are available to stream on discovery+.

"I knew that I had a real passion for competitive cooking when we first started talking about this show, and this experience has turned that passion into a full-on obsession," said Guarnaschelli. "Getting to work with the charismatic and supremely talented Eric Adjepong is icing on a nearly perfect cake, nearly perfect because as I have said before, I really love winning and absolutely hate losing even more."

How do you feel about this latest Alex vs America news? Share your thoughts with us in the comments below and don’t forget to stay tuned for all the renew/cancel 2021-2022 and beyond news!