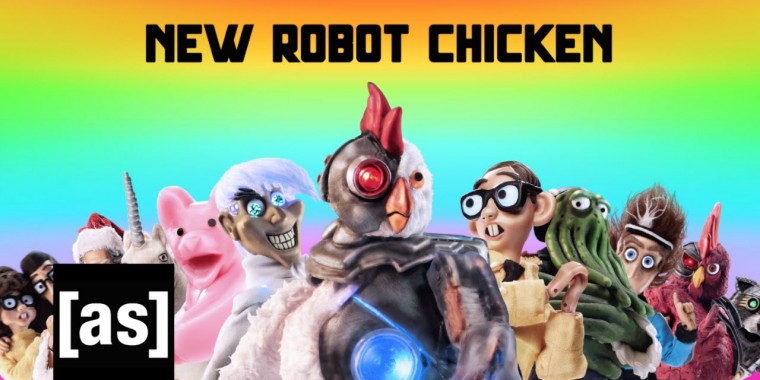 The summer is off to a hot start on Adult Swim, the #1 destination for young adults and a leader in original animation. Fans can spend some quality time inside this summer with their favorite animated shows including the midseason return of Robot Chicken and new seasons of Tender Touches, 12oz Mouse, and series premiere of YOLO: Crystal Fantasy.

The quarter-hour animated series is created by David Bonawits, Lauren Payne and Max Simonet, who all serve as regular voice cast members. The series is produced by Adult Swim’s Williams Street Productions and animated by Awesome, Inc.

Robot Chicken’s 10th season milestone continues not for celebrating the 200th episode of the Emmy(R) Award winning show, but for attempting top-secret new formats that break new ground in animated sketch comedy! Um… or something like that.

Season three of 12oz Mouse? returns in a special two-week run beginning Monday, July 20th at Midnight ET/PT. This comically surreal psychological thriller takes place in a world where fish talk and eyeballs walk.? Trapped in this unconventional version of Hell, we follow Mouse? on his journey to recollect his past and find the truth about who he once was.? Mouse discovers old friends and new ones that are also looking for the way home but who can be trusted when they are surrounded by conspiracy and raw emotional evil that trapped them here in the first place??

Warner Bros. is a global leader in the creation, production, distribution, licensing and marketing of all forms of entertainment across all current and emerging media and platforms. A WarnerMedia company, the Studio is home to one of the most successful collections of brands in the world and stands at the forefront of every aspect of the entertainment industry, from feature film, television and home entertainment production and worldwide distribution to DVD and Blu-ray, digital distribution, animation, comic books, videogames, product and brand licensing, and broadcasting.

Adult Swim's off-the-wall stop-motion comedy series Robot Chicken is back for season 11 and filled with more hilarious parodies and insane characters and personalities from Joe Exotic to Peppa Pig. The new season will air as a nightly strip Monday through Thursday at Midnight ET/PT beginning Monday, September 6 through Thursday, September 23.

The Robot Chicken Nerd and Bitch Pudding are also back along with a spooky Halloween-themed episode. And not to disappoint, no corner of pop culture is safe from Robot Chicken's satirical gaze this season. The show skewers today's biggest hits and classics including fan-favorite characters from movies, television shows, video games, celebrities, and even nursery rhymes - Robot Chicken spares nothing and no one and prides itself on having the most comedy a quarter-hour sketch comedy show can provide!

How do you feel about this latest Robot Chicken news? Share your thoughts with us in the comments below and don’t forget to stay tuned for all the renew/cancel 2021-2022 and beyond news!