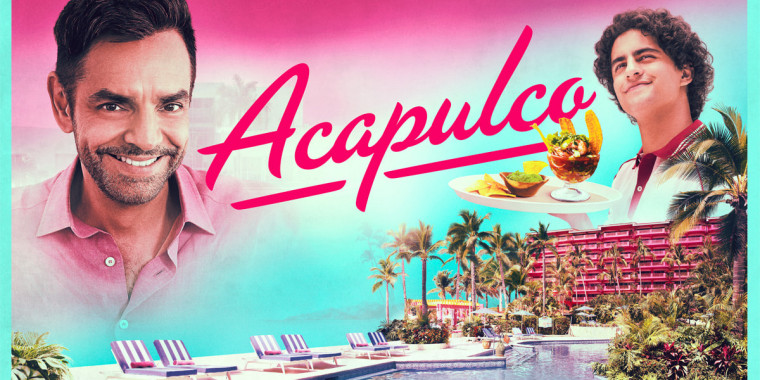 Apple TV+ is heading back to Acapulco for Season 2.

In 1984, Maximo Gallardo’s dream comes true when he gets the job of a lifetime at Acapulco’s hottest resort, Las Colinas. But he soon realizes that working there will be far more complicated than he ever imagined.

Apple TV+ is extending their stay at the Las Colinas resort with today's news of a season two renewal of the global hit comedy series, "Acapulco." The Spanish and English-language series, which currently sits at 100% on Rotten Tomatoes from its season one run, stars executive producer Eugenio Derbez, who recently took home a SAG Award as part of the celebrated ensemble of Apple Original Film, "CODA." "Acapulco" will begin production on season two this spring, once again filming on location in Mexico.

"Acapulco" tells the story of twenty-something Máximo Gallardo (Enrique Arrizon), whose dream comes true when he gets the job of a lifetime as a cabana boy at the hottest resort in Acapulco. Season two picks up right on the heels of season one. In 1985, Máximo must contend with upheaval at the resort, unexpected problems at home, and a new love interest who just might rival the girl of his dreams. In the present day, Older Máximo (Eugenio Derbez, who also narrates the series) arrives in Acapulco, where he encounters various people from his past - for better and worse.

"Acapulco" was the first series of an expanding lineup of Apple Originals from the world's greatest storytellers, including upcoming series "Echo 3," a new action-thriller set entirely in South America and written by Academy Award-winning producer and writer Mark Boal; "Dr. Brain," a Korean language original series from visionary filmmaker Kim Jee-Woon; "Pachinko," which will be told in Korean, Japanese, and English, and is a drama based on the acclaimed novel; "Masters of the Air," a new limited drama series from Apple Studios and executive produced by Steven Spielberg's Amblin Television, and Tom Hanks' and Gary Goetzman's Playtone; "Slow Horses," an international espionage thriller starring Academy Award winner Gary Oldman; as well as new stories from the multi-Academy Award, Golden Globe and BAFTA Award-winning director, writer, producer, cinematographer and editor Alfonso Cuarón, who currently has an overall deal with Apple TV+.

How do you feel about this latest Acapulco news? Share your thoughts with us in the comments below and don’t forget to stay tuned for all the renew/cancel 2021-2022 and beyond news!