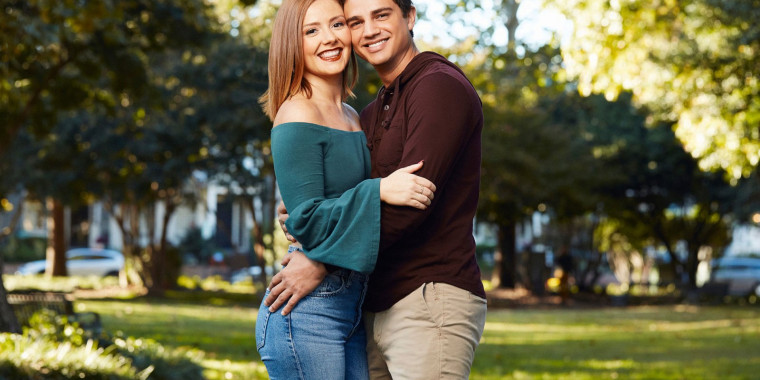 Four new and three returning couples from the 90 Day franchise are ready to put it all on the line for what they believe to be true love in a brand-new season of 90 DAY FIANCÉ. The eighth season of the original 90 Day series that started it all premieres Sunday, December 6 at 8PM ET/PT on TLC. These couples have overcome many obstacles to get approved for the K-1 Visa and bring their spouses-to-be stateside, but the hard part is far from over. They will each have 90 days from the moment their significant other lands on U.S. soil to say “I do,” or else the foreigners will have to head back to their home countries.

"90 Day Fiance" offers a unique look into the world of international dating and matrimony.

Using a unique 90-day fiance visa, the K-1 visa, four women and two men will travel to the U.S. to live with their overseas partners for the first time. The couples must marry before their visas expire in 90 days, or the visiting partner will have to return home.

They'll have to overcome language barriers, culture shock and skeptical friends and family -- all with a clock that starts ticking the moment they step foot on U.S. soil.

The stakes are incredibly high as these couples are forced to make a life-altering decision: get married or send their international mate home.

The original 90 Day series that started it all and sparked obsessive conversation around the world is back! Seven couples have 90 days to figure out whether their love can go the distance when the ninth season of 90 DAY FIANCÉ premieres on TLC and discovery+ Sunday, April 17 at 8PM ET/PT. Last year, 90 DAY FIANCÉ was the #1 unscripted show with all key adult and women demos, and since the show's original debut in 2014, 4.3 billion hours of 90 Day content have been consumed. The show has truly taken the globe by storm, having filmed in 46 countries, aired in 181 territories and even been broadcast in 39 different languages.

Following K-1 visa rules, the couples will have 90 days to wed before the visa expires and their fiancé is sent back to their home country. The pressure is on and with travel guidelines more challenging than ever, there's even more at stake with these international love stories. This season, couples aren't just navigating unique lifestyle and cultural changes when arriving in America - many of them must also adjust to parenthood and nontraditional family lifestyles. And while absence makes the heart grow fonder, personalities and temperaments have changed and not always for the best... will these seven couples make it to the altar?

Emily left her small town for the bustling city of Xi'an, China to teach English. While out clubbing one night, she met Kobe and the connection was instant. Within two weeks, their one-night stand turned into an engagement, and a pregnancy followed soon after. When Emily returned to Kansas, they both assumed Kobe's visa would be quickly approved, but the pandemic delayed him by almost two years. During that time, Emily gave birth to their son and has been raising and supporting him on her own, while Kobe has not even had the chance to meet him yet. The pair is ready to reunite and become a family, but will their relationship be the same given all the physical, geographical and familial changes since that fateful night out in China?

Viewers first met Ari and Bini on 90 DAY FIANCÉ: THE OTHER WAY, and after several seasons of relationship hurdles, the couple is giving it one last try in the United States. The pair first met crossing the street in Ethiopia and the rest is history: Ari found out she was pregnant and moved to Ethiopia to be with Bini. But when their son, Avi, needed surgery, Ari moved back to the United States, and the distance, amplified by Bini's poor communication skills, strained their relationship. In spite of it all, Ari and Bini plan to wed, but will religion, family introductions and Bini's past get in the way?

Guillermo, a Venezuelan living in the Dominican Republic, caught Kara's eye while she was on a work trip there. The two kept in touch after she returned home, not thinking it was anything serious, but that all changed when Kara's job asked her to relocate to the Dominican Republic. Things escalated from there - Kara moved in with Guillermo upon her arrival, and an engagement quickly followed, raising eyebrows amongst Kara's skeptical family and friends. Due to the pandemic, Kara moved back home, and the two have been separated for nine months. With his visa approved, Guillermo is now set to move to Charlottesville, but will their whirlwind romance be able to survive Kara's partying habits and Guillermo's insecurities?

The sparks flew instantly when Bilal and Shaeeda finally met in person after connecting online months before: in fact, Bilal proposed after spending just one week together! Their lives couldn't be more different, as Bilal is a divorced father of two while Shaeeda still lives at home with her parents. Shaeeda is ready to start a family of her own with Bilal, but he isn't sure he wants any more children. On top of that, Bilal wants Shaeeda to sign a prenup, causing a further rift between the two. Will the pressures of moving to the United States, taking care of a family, and fostering a healthy relationship prevent them from walking down the aisle?

It was a picture-perfect moment: Jibri noticed Miona in the audience of his band's show in North Serbia. They've been together ever since, and Jibri proposed during one of their trips around the world. Miona can't wait to move to the United States and envisions a lavish life in Los Angeles, but Jibri recently moved back to his family's home in South Dakota. Will Miona be able to accept a life with Jibiri in a small town, or will the strains of living with his family, combined with her jealousy, prove to be too much?

Despite a 23-year age gap, Mohamed slid into Yvette's DMs after noticing their shared love of fitness. The flirtation became an engagement when Yvette traveled to Egypt to meet Mohamed in person. At home, Yvette has a twelve-year-old son with special needs, meaning Mohamed is going to be closer in age to his future stepson than to his wife if they say "I do." On top of that, the culture norms in the States are different from what Mohamed is used to, and he's not sure he's comfortable with the independent and carefree way Yvette lives her life. Will the realities of a life together be too much for this couple's relationship to survive?

When Patrick traveled to Brazil to reconnect with his father's side of the family, he decided to look for a Portuguese teacher on dating apps. Thaís swiped right and was more than happy to help him out. Patrick courted Thaís over several trips to Brazil, winning her heart, showering her with lavish gifts and eventually proposing. Despite never having been to the United States, Thaís is excited to start a new life with Patrick, but will he be able to give her the extravagant life she's used to in Brazil? And will the deep emotional wounds Patrick sustained from his first divorce cause him to think twice about his pending nuptials?

How do you feel about this latest 90 Day Fiance news? Share your thoughts with us in the comments below and don’t forget to stay tuned for all the renew/cancel 2021-2022 and beyond news!