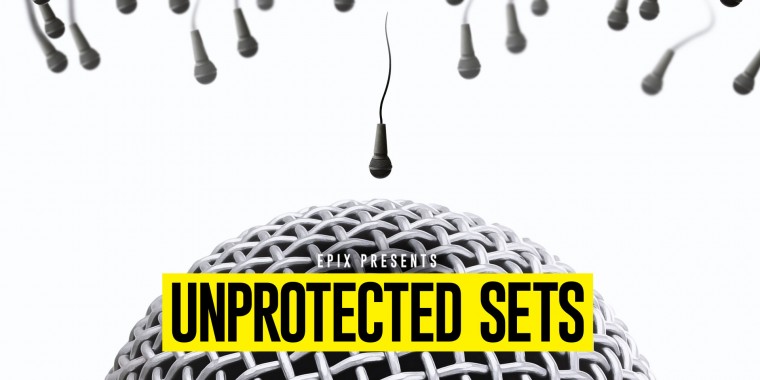 Unprotected Sets returns for a second season, with an all new class of killer comedians. In this voyeuristic, stand-up comedy series, nex-gen headliners allow cameras behind the scenes, and inside their minds, giving viewers a premium experience, connecting the comedy with their intimate confessions. It only feels fun if it’s… Unprotected Sets. The series is produced by MGM Television and Evolution Media.

Unprotected Sets returns to EPIX for a third season with eight newly minted, one-hour specials from today's freshest voices in standup comedy. Uproarious onstage performances and candid green room confessionals offer a revealing look into the life and mind of a comic unlike any other show on the market today. The series is produced by MGM's Evolution Media.

Over three successful seasons, Unprotected Sets has helped discover the next generation of comedy headliners, including breakout stars Zainab Johnson (co-host of Netflix's 100 Humans), Clayton English (TruTV's Laff Mobb's Laff Tracks), and Rob Christensen (Apple TV+'s The Problem with Jon Stewart). Today, in addition to the series, audiences can now listen to all new episodes of the Unprotected Sets companion podcast, which is available on all major platforms. The podcast, produced by MGM Television and Audio Up, features the funniest working comedians from across the country. Nothing is off-limits as each comedian brings their life into the art.

From executive producers Wanda Sykes and Page Hurwitz (Push It Productions) & Barry Poznick, President of MGM's Unscripted Television and MGM Television, UNPROTECTED SETS will take a raw, unfiltered look at stand up through the eyes of the funniest up and coming comedians from across the country. Shooting in Portland, San Diego, D.C., Minneapolis and Atlanta, each episode presents a compelling portrait of a comedian on the verge of breaking out to become the next big name in comedy. The diverse lineup of breakout talent offers insights into the motivations behind baring one's soul for a living. Their dynamic, personal, and hilarious performances - where nothing is off limits - will show us exactly how, in their own inimitable way, each comedian turns life into art.

Unprotected Sets returns for a second season, with an all new class of killer comedians. This is the only stand-up series that pairs hilarious performances onstage with deep & revealing interview segments backstage, creating an instant connection to the comics and a richer experience for viewers at home. It only feels fun… if it’s Unprotected Sets.

How do you feel about this latest Unprotected Sets news? Share your thoughts with us in the comments below and don’t forget to stay tuned for all the renew/cancel 2021-2022 and beyond news!