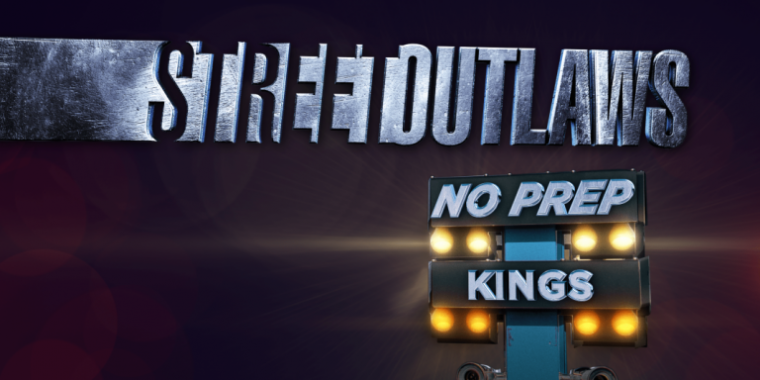 NEW CARS ON THE BLOCK! "STREET OUTLAWS: NO PREP KINGS" RETURNS FOR AN ALL-NEW SEASON OCTOBER 11 ON DISCOVERY AND DISCOVERY+

The wait is finally over! America's fastest street racers are back, and the stakes are higher than ever with 15 events, new cars, new drivers, and nearly $900K up for grabs. In an all-new season of STREET OUTLAWS: NO PREP KINGS, the fans are back in-person to watch the best drivers in the country return to the track for louder call-outs, riskier racing and more full throttle thrills.

An all new season of STREET OUTLAWS: NO PREP KINGS premieres Monday, October 11 at 8pm ET/PT on Discovery and streams on discovery+. Fans also won't want to miss the all-new STREET OUTLAWS NO PREP KINGS: TEAM ATTACK immediately following new episodes of NO PREP KINGS every Monday at 10pm ET/PT. Each week, two racers from each of the eight teams will race until there's only one winner of the $15K cash prize to split however they choose among the winning team. Viewers can also join the conversation on social media by using #StreetOutlaws:NoPrepKings and following Street Outlaws on Facebook, Twitter, and Instagram.

This season of NO PREP KINGS is bigger, better and faster than ever before. With more teams in the mix, new cars making their debut, more racing locations than ever and new faces stepping into the STREET OUTLAWS world, these racers are in for a do or die competition that will crown the 4th ever No Prep Kings champion walking away $100K richer.

The biggest names from NO PREP KINGS are back, including NOLA's Kye Kelly and Lizzy Musi, OKC's Murder Nova and Daddy Dave, Texas' Mike Murillo and Birdman, and Cali's Boddie and Brandon James. Each team is ready to do whatever it takes to ensure their rivals stay out of the winner's circle - but will reigning champ Ryan Martin dominate once again in his brand new, souped up Camaro that's never been raced before? With ample downtime to build brand-new cars due to the pandemic, these racers are ready to put their engines to the test in the biggest competition of them all.

From Ohio to Georgia, Colorado to Arizona, the best of the Street Outlaw titans lay it all on the starting line - but who will be crowned at the end?

How do you feel about this latest Street Outlaws: No Prep Kings news? Share your thoughts with us in the comments below and don’t forget to stay tuned for all the renew/cancel 2021-2022 and beyond news!