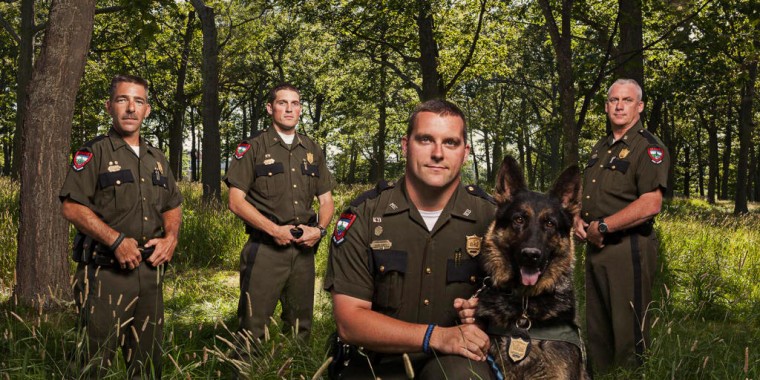 Whether it’s the rugged landscapes or heart-stopping animal encounters, New Hampshire provides a never-ending series of unpredictable challenges for its conservation officers. In an all-new season of NORTH WOODS LAW, Animal Planet follows the demanding pursuits of the Conservation Officers as they work relentlessly against the clock on search and rescue missions, tracking down fleeing criminals, preserving and protecting the state’s resources, and enforcing laws on both land and water. The all-new season premieres on Animal Planet Sunday, Oct. 11 at 9PM ET/PT.

In the NORTH WOODS LAW season premiere, a nurse discovers a severed finger near the summit of Mount Monadnock leading Conservation Officer Hannett, New Hampshire State Police and a K9 unit on a harrowing investigation; Officer Towne’s patrol is interrupted by a call from the principal at his son’s school requesting help with the baby snapping turtles hatching all over the playground; and Officer Masucci is caught off guard when a bear hunter makes a surprising confession.

Other stories on NORTH WOODS LAW this season include New Hampshire Fish and Game and the National Guard joining forces to rescue a climber who has fallen fifty feet from the Granite State’s largest cliff face; Lt. Boudreau and a team of biologists working to capture and relocate a moose after it has wandered into downtown Nashua; Officer McKee going on a wild goose chase when the passengers in a fatal accident claim the driver has fled the scene; and the wardens attempting to chase off a black bear that has decided a car is the optimal location for its winter den.

From the White Mountains of the Appalachians to the rocky shores of the Atlantic Ocean, the Conservation Officers of New Hampshire Fish and Game work endlessly to preserve and protect the natural resources of the Granite State. In an all-new season of NORTH WOODS LAW, Animal Planet follows the demanding pursuits of the Conservation Officers as they conduct, among other activities, search and rescue operations on windswept mountains and roaring rivers, assist biologists in managing the state's wildlife, and patrol backcountry roads during hunting season as every day presents all-new challenges. NORTH WOODS LAW premieres on Animal Planet Sunday, June 20 at 9PM ET/PT.

In the NORTH WOODS LAW season premiere, Conservation Officers Joe Canfield and Brad Jones search the Merrimack River for a missing person and their vehicle which expands to a multi-day effort with help from Lieutenants Jim Kneeland and Adam Cheney, along with members of the Fish and Game Dive Team; Sergeant Glen Lucas works a case involving the illegal release of a coyote from a local trapper's trap; and in Concord, Conservation Officer James Benvenuti and Colonel Kevin Jordan, along with rehabilitator Jane Kelly and her birds of prey, host an informational meet and greet event.

Other stories this season on NORTH WOODS LAW include Officer Canfield and Trainee Letourneau investigating an unattended bobhouse whose owner is missing and may have fallen through the ice; Conservation Officer Chris McKee embarking on a multi-day pursuit to rescue a goose with a plastic six-pack ring around its neck; Officer Hannett investigating an abandoned barrel that may be related to a 20-year cold case involving the disappearance of a mother and daughter; Officer Crouse responding to a report of a possibly rabid raccoon in Rochester that he must snare and remove from the heavily populated area; the New Hampshire Fish and Game dive team searching for two drowning victims in the Merrimack river; and Conservation Officers Matt Holmes and Bob Mancini running radar when Holmes is struck by an ATV going well over the speed limit.

How do you feel about this latest North Woods Law news? Share your thoughts with us in the comments below and don’t forget to stay tuned for all the renew/cancel 2021-2022 and beyond news!