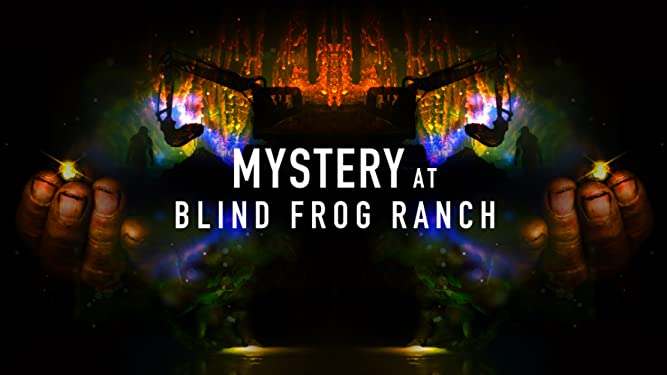 Blind Frog Ranch--Duane Ollinger's sprawling 160-acre property in Utah's Uintah Basin--continues to reveal its perplexing secrets. After discovering a large wooden box in a flooded cavern, Duane and his team are hellbent on extracting it from the cave, believing it contains the fabled treasure of the Aztecs. Tune into the all-new season of MYSTERY AT BLIND FROG RANCH, premiering on Friday, January 7, at 10PM ET/PT on Discovery Channel.

After the winter freeze shut down their operation last year, Duane Ollinger and his son Chad, head of ranch security Charlie Snider, world-renowned geologist Eric Drummond, and investigator Jamie Dube return to Blind Frog Ranch to continue their quest for Aztec gold. When attempting to remove the box from the cave results in near-disaster, Eric discovers another incredible mystery: the large rocks that are inside the box have been bored, and contain cylinders of a strange metal that liquifies at room temperature. Could this be part of the Aztec treasure, or is it a new mystery? Nobody is certain.

But Duane and his team are not alone in their pursuit of the sunken treasure. After finding a remote-operated surveillance camera aiming directly at their worksite, the men suspect they are being watched. Military helicopters buzzing over the property, gun-weilding intruders, and a murder investigation push suspicions to the edge. The men work tirelessly to get into the cavern to secure the box--and its mysterious contents--before someone else beats them to it.

Finally, after mapping the fault system of the ranch, Eric discovers a dry entrance to the cavern. Wasting no time, Duane drills directly into the cavern and forges a new access point. But when they detect radioactivity emitting from the newly drilled hole, the operation is once again jeopardized. Will Duane decide to risk his life entering the cavern, or risk the possibility of losing the treasure to unknown intruders?

Sitting nearly adjacent to Skinwalker Ranch in Utah - another area notorious for paranormal sightings and other mysterious activity - Blind Frog Ranch has drawn treasure seekers for hundreds of years. And now, Duane Ollinger has sunk everything he has in hunting for what he believes is a vast fortune of gold in the ground. But with each step Duane takes closer to finding the treasure, the land seems to hold on tighter, stopping him in his tracks.

With his money, resources and reputation on the line, Duane is hellbent on finding the truth and uncovering the treasure - no matter the cost. So, this year, he's going all in and bringing on a team of people to help him: his son, Chad Ollinger, friend and retired Sheriff's Deputy, Charlie Snider, and Eric Drummond, a renowned geologist who will help him map the faulted land. Duane and his crew will pull out all the stops - and heavy machinery - to find the treasure buried beneath Blind Frog Ranch, even if the land fights them every step of the way.

In addition to watching the series on Discovery, viewers can check out new episodes each week and the first episode of MYSTERY AT BLIND FROG RANCH on the Discovery GO app. Viewers can join the conversation on social media by using the hashtag #BlindFrogRanch and follow Discovery on Facebook, Instagram, and Twitter for the latest updates.

How do you feel about this latest Mystery at Blind Frog Ranch news? Share your thoughts with us in the comments below and don’t forget to stay tuned for all the renew/cancel 2021-2022 and beyond news!