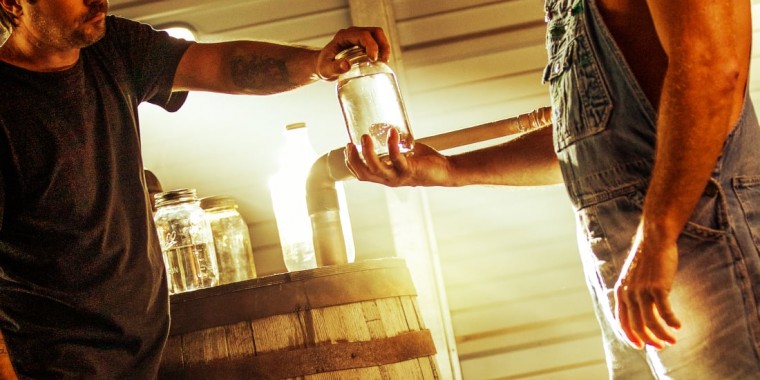 HARD TIMES MAKE THE BEST SHINE! AN ALL NEW SEASON OF DISCOVERY’S MOONSHINERS PREMIERES NOVEMBER 24
Times are tough around the world in 2020, and life in the backwoods of Appalachia is no exception. But for America’s favorite moonshiners, there’s a silver lining in these trying times. Just as their forefathers discovered during the Great Depression, outlaw shiners thrive in the face of adversity. While the global economy has shuttered the doors of businesses around the country, the moonshine business is booming.

In an all new season of Discovery’s hit series, MOONSHINERS, America’s favorite outlaw distillers will be tested like never before as they take bigger risks and ramp up their backwoods operations to meet unprecedented demand while taking advantage of an oversupply of raw ingredients unlike anything they’ve seen before. As only backwoods shiners will know, hard times make the best shine!

The new season of MOONSHINERS premieres Tuesday, November 24 at 8pm ET/PT on Discovery with a special 2-hour episode. In addition to watching MOONSHINERS on Discovery, viewers can join the conversation on social media by using the hashtag #Moonshiners and following Discovery on Facebook, Twitter, and Instagram.

When the economy took a turn for the worse at the beginning of 2020, businesses around the country closed and national supply chains were majorly disrupted, leading to massive quantities of surplus ingredients for backwoods shiners to produce an endless supply of high-quality liquor for cheap. With an abundance of fruits and grains and some very distracted law enforcement, MOONSHINERS look to develop new recipes by building bigger stills and taking bigger risks than ever before.

Already accustomed to a socially distant lifestyle, Tim, Tickle, Mark, Digger, Josh and the rest of the MOONSHINERS crew are ready to prove that while times may be tough, there’s always a silver lining in moonshining!

(October 6, 2021 - NEW YORK) -- Following a challenging year of lockdowns, restrictions and skyrocketing demand for liquor, the backwoods economy of moonshine is booming like it's the roaring twenties all over again. Business has never been better and there's never been a higher demand for booze, but boom time for moonshine comes with a lot more risk... and a lot more law enforcement.

With the return of everyone's favorite outlaw 'shiners and America's favorite and only spirits-making competition show all on the same night, Wednesday nights are about to get a lot more... spirited! An all-new season of MOONSHINERS premieres Wednesday, October 27 at 8pm ET/PT on Discovery and streams on discovery+, followed by all-new episodes of the ultimate booze-making competition series MASTER DISTILLER at 9pm ET/PT on Discovery. Fans can also follow the conversation on social media #Moonshiners and #MasterDistiller, and follow Moonshiners Facebook and Twitter for more updates.

And to round out the night, fans can also catch up on episodes of MOONSHINERS: SMOKE RING at 10pm ET/PT on Discovery. The series follows legendary Moonshiner, Tickle, as he ventures into the deep South in search of the best pit masters from around the country to compete in a high stakes battle to determine whose heritage and skills produce the best tasting BBQ. It's man, meat and fire in its truest form -- who will walk away King or Queen or the Smoke Ring? All three series are produced by Magilla Entertainment.

This season on MOONSHINERS, Tickle, Tim Smith, Josh Owens , Mark Ramsey, Eric (Digger) Manes and the rest of the gang are back as the backwoods economy that drives their beloved way of life is thriving. But law enforcement is back on their game, forcing shiners to cross state lines to practice their craft and elude capture. After their stash house was raided by police last winter, Mike Cockrell and Jerry Benson build the courage to return to the scene of the crime, but will they be ready to start a new backwoods operation across state lines? Forced to flee Tennessee after a police raid, Mark and Digger will soon discover the challenges of making good Tennessee Whiskey in a different state. Meanwhile, Tickle expands his partnership with Josh Owens and outlaw shiners Henry and Kenny Law, assembling a new mega still-site operation in Virginia, while new Louisiana moonshiner, Richard Landry, discovers a hot New Orleans market for outlaw absinthe.

While the economic shutdown may be in the rearview... so is the law! But as only backwoods 'shiners will know - boom times are for moonshine!

This season on MASTER DISTILLER, the best-of-the-best legal and outlaw 'shiners from across the country are back and ready to compete in the thrilling distilling competition that's boozier than ever. Three competitors, three judges, and one winning spirit -- they'll distill everything from applejack (the first American spirit) to medicinal liquors in the tradition of Jagermeister and Campari. The competitors will go toe-to-toe in challenges such as Scotch vs American vs Japanese whiskey, which pits three regional whiskeys against each other, as well as a lost family recipe showdown where they'll bring their best backwoods family recipes to the competition. Hosted by moonshining legends Mark, Digger, Tim, and Tickle along with guest judges at the top of their field, each episode will determine who has what it takes to be called Master Distiller. Let the battle of the booze begin!

Deep in the most remote corners of Appalachia, the challenge of turning raw local ingredients into high-dollar shine - while simultaneously competing with rival shiners and evading law enforcement - has never been more complex. Facing unprecedented demand for real backwoods liquor, the shiners must scale up their secret distilling operations and devise more innovative recipes, making it all the more difficult to practice their age-old craft in the shadows.

For the surviving Moonshiners, ingenuity, loyalty and tradition will be tested like never before.

Fresh out of jail, Tickle chases the siren call of the backwoods, teaming up with legendary outlaw shiners Henry and Kenny Law to make high-proof, high-dollar liquor. Tickle's best friend and legal shiner, Tim Smith, finds it hard to resist the allure of their former partnership on the outlaw side. After rediscovering legendary shiner Popcorn Sutton's multi-grain moonshine, Mark and Digger attempt to reverse-engineer a recipe that was decades ahead of its time. It's the biggest bet they've taken, and one that will put them at odds with a rival shiner. Mike and Daniel face a crossroads after an injury disrupts their massive backwoods build and drives a wedge in their partnership. Josh overcomes a broken back and finds a new partner to help build his most ambitious underground still site yet, carrying on four generations of family tradition in outlaw moonshine.

With higher demand and more money comes greater risk, but the everyday antiheroes of MOONSHINERS are determined to keep the code of the backwoods while pushing the envelope of ingenuity to make the finest liquor money can buy.

How do you feel about this latest Moonshiners news? Share your thoughts with us in the comments below and don’t forget to stay tuned for all the renew/cancel 2021-2022 and beyond news!