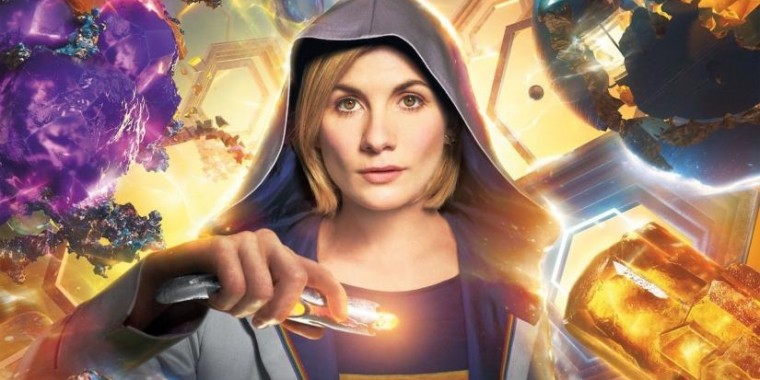 CAPTAIN JACK IS BACK

One of the most iconic characters in the Whoniverse is returning for the upcoming holiday special of Doctor Who, as John Barrowman MBE puts on his famous coat once more and reprises his role as Captain Jack Harkness.

The cheeky Captain left viewers reeling in the season 12 episode, “Fugitive of the Judoon,” when he made a brief surprise appearance with a stark warning for Yaz, Ryan and Graham to pass on to the Doctor before disappearing.

In the upcoming special titled “Revolution of the Daleks,” Captain Jack will be on hand to help the fam as they discover a disturbing plan forming involving one of the Doctor’s most feared and dangerous enemies, the Daleks. With the Thirteenth Doctor locked away in a space prison, will Captain Jack be able to help save planet Earth?

On returning for the special, Barrowman revealed: “Putting on Jack’s coat and setting foot back on the set of Doctor Who was just like going back home. It’s always thrilling to play Captain Jack. He’s a character very close to my heart who changed my life, and to know the fans love him as much as I do makes his return even sweeter. I hope everyone enjoys Jack’s heroic adventure with Thirteen.”

Chris Chibnall, Executive Producer, said: “A Doctor Who holiday special means treats galore, and there’s no bigger treat than the return of John Barrowman to Doctor Who, for an epic and emotional feature-length episode. If anyone can blast away the sheer rubbishness of 2020, it’s Captain Jack. Daleks beware!”

Matt Strevens, Executive Producer BBC Studios, added: “After a tantalisingly brief appearance in “Fugitive of the Judoon,” it’s a total joy and thrill to welcome back John as Captain Jack. One of the most iconic characters in Doctor Who lore, his presence ignites this holiday special from the start.”

“Revolution of the Daleks” will air this holiday season on BBC AMERICA.

· Jodie Whittaker stars as the Thirteenth Doctor, Mandip Gill as Yaz, Tosin Cole as Ryan and Bradley Walsh as Graham

· Captain Jack made his first appearance in the 2005 episode of Doctor Who, “The Empty Child” and appeared in multiple episodes.

· Prior to his series 12 appearance in “Fugitive of the Judoon,” Captain Jack was last seen on Doctor Who in the 2010 episode “The End of Time”

· John Barrowman MBE fronted the Doctor Who spin-off, Torchwood, which aired from 2006-2011

About Doctor Who TV Show

Russell T Davies to return as Doctor Who showrunner

Multi award-winning Russell T Davies will take control of the TARDIS once more as the next Doctor Who showrunner, succeeding Chris Chibnall, who departs next year.

I’m beyond excited to be back on my favourite show. But we’re time-travelling too fast, there’s a whole series of Jodie Whittaker’s brilliant Doctor for me to enjoy, with my friend and hero Chris Chibnall at the helm - I’m still a viewer for now.”
— Russell T Davies says

Russell T Davies will make an explosive return to screens to celebrate the 60th Anniversary of Doctor Who in 2023, and series beyond. BBC Studios is partnering with Bad Wolf to produce.

Responsible for Doctor Who’s revival in 2005, Davies is credited with propelling the show into a global phenomenon and making it one of TV’s biggest hits.

His tenure on the show oversaw a surge in popularity, enjoying huge acclaim and success. The Doctor won the nation’s hearts through his masterful relaunch, which led him to create two spin-off series, Torchwood and The Sarah Jane Adventures, during that time.

Davies left the show in 2009. A lifelong Doctor Who fan, he has most recently achieved huge success with Years And Years, A Very English Scandal and It’s A Sin, which won Best New Drama at the National TV Awards this month.

Russell T Davies says: “I’m beyond excited to be back on my favourite show. But we’re time-travelling too fast, there’s a whole series of Jodie Whittaker’s brilliant Doctor for me to enjoy, with my friend and hero Chris Chibnall at the helm - I’m still a viewer for now.”

Chris Chibnall says: “It’s monumentally exciting and fitting that Doctor Who’s 60th anniversary will see one of Britain’s screenwriting diamonds return home. Russell built the baton that is about to be handed back to him. Doctor Who, the BBC, the screen industry in Wales - and let’s be honest everyone in the whole world - have so many reasons to be Very Excited Indeed about what lies ahead.”

Piers Wenger, BBC Director of Drama, says: “As the 13th Doctor prepares to embark on new and extraordinary adventures, the winds of change are blowing… bringing with them news to delight Doctor Who fans across the globe. We are thrilled that Russell is returning to Doctor Who to build on the huge achievements of Chris and Jodie. Thank you to the two of them and the team in Cardiff for all they continue to do for the show and hello Russell, it’s wonderful to have you back.”

Season 13 Premieres Fall 2021
She's back. The Thirteenth Doctor is returning for the thirteenth series in what is set to be a six-part Event Serial. Since their last epic battle in Revolution of the Daleks, the Doctor (Jodie Whittaker) and Yaz (Mandip Gill) have been exploring the universe together but with the Doctor now questioning everything about her past there she will undoubtedly be searching for answers. This adrenalin fueled; universe-spanning series will also see an addition to the TARDIS with actor and comedian John Bishop joining the cast as Dan Lewis who will quickly learn there's more to the Universe than he could ever believe. Jacob Anderson (Game of Thrones, Broadchurch) is also set to make his debut on Doctor Who as reoccurring character, Vinder. Jacob's new role will see him join forces with the Doctor, Yaz and Dan as the Doctor faces her biggest ever adventure. Series 13 is set to introduce some terrifying new adversaries and the return of truly iconic old enemies. Expect action, fun, scares, extraordinary new worlds as the Doctor and her friends confront a deadly evil...

· Jodie Whittaker stars as the Thirteenth Doctor, Mandip Gill as Yaz, Tosin Cole as Ryan and Bradley Walsh as Graham.

· Chris Noth previously appeared in the season 11 episode of Doctor Who, "Arachnids in the UK."

· Captain Jack made his first appearance in the 2005 episode of Doctor Who, "The Empty Child" and appeared in multiple episodes.

· Prior to his season 12 appearance in "Fugitive of the Judoon," Captain Jack was last seen on Doctor Who in the 2010 episode "The End of Time."

· John Barrowman MBE fronted the Doctor Who spin-off, Torchwood, which aired from 2006-2011.

How do you feel about this latest Doctor Who news? Share your thoughts with us in the comments below and don’t forget to stay tuned for all the renew/cancel 2021-2022 and beyond news!