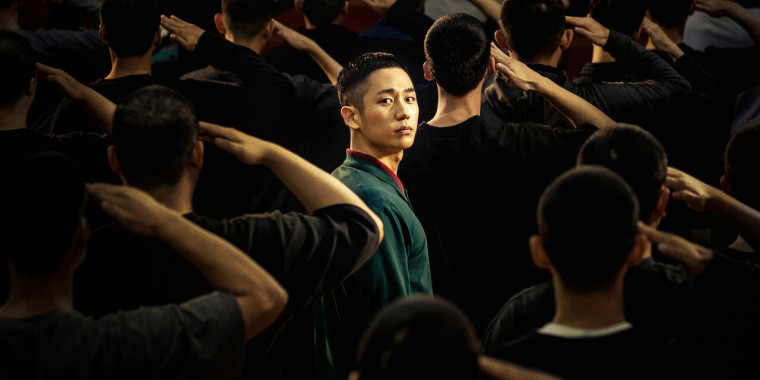 Netflix has confirmed the production of Season 2 for D.P., a series that was released this year on August 27th that brought hidden social issues under the spotlight. It was selected for The New York Times Best International Shows of 2021 when the list was released on December 3rd.

Netflix has confirmed the production of Season 2 for D.P., a series that was released this year on August 27th that brought hidden social issues under the spotlight. It was selected for The New York Times Best International Shows of 2021 when the list was released on December 3rd.

D.P. centers on Deserter Pursuit Unit members An Joon-ho (Jung Hae-in) and Han Ho-yeul (Koo Kyo-hwan) as they come across different stories while tracking down fellow soldiers who have deserted their posts.

Based on the webtoon D.P. Dog's Day by Kim Bo-Tong, D.P. takes on new life with Director Han Jun-hee of Coin Locker Girl and Hit-and-Run Squad weaving in keen insights and poignant details. The series earned high praises both domestically and internationally for shedding light on neglected stories of AWOL soldiers and those who search for them. Season 1 ends with walking in the opposite direction as the other soldiers. The sound of his footsteps breaking out into a run can be heard even after the credits start rolling, leaving viewers wondering where the story will be headed from there.

D.P. captivated viewers and critics alike with mesmerizing characters placed in the novel premise of soldiers hunting down AWOL soldiers. With electrifying chemistry between Jung Hae-in and Koo Kyo-hwan and sublime performances from Kim Sung-kyun, Son Suk-ku and the other actors, the characters resonate with viewers across the board regardless of generation and gender. The series is not shy about delivering an incisive social message about absurdities of life and unjust realities that are relevant not only in Korean society but in international contexts. Overseas reviewers have commented on the story's overarching impact: "D.P. is dark, gritty, sobering and indicative of the world today. It is one of the finest K-Drama mini-series released this year" (Ready Steady Cut); and "... uniformly excellent performances, splendid cinematography, addictive pacing and intrepid commitment to shedding light on the appalling culture of bullying in the military make D.P. a compelling six-hour binge" (NME). Season 2 will pick up where Season 1 left off with director Han Jun-hee reuniting with writer Kim Bo-Tong to co-write and to create another round of episodes that deeply resonate with viewers around the world.

D.P. will return as Season 2 with all the fascinating stories leading up to it in Season 1 can be found only on Netflix.

How do you feel about this latest D.P. news? Share your thoughts with us in the comments below and don’t forget to stay tuned for all the renew/cancel 2021-2022 and beyond news!