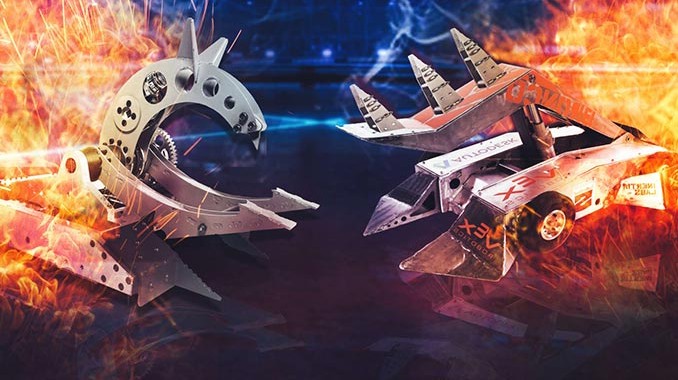 “BATTLEBOTS,” THE WORLD’S PREMIER ROBOT COMBAT COMPETITION, GETS PICKED UP BY DISCOVERY FOR TWO SEASONS WITH AN UNPRECEDENTED 80 HOURS OF ROBOT-FIGHTING ACTION

Who's ready for a Sin City showdown? BATTLEBOTS, the world's premier robot fighting competition, is back and more ferocious than ever. This season, bots from around the globe descend upon Las Vegas for a battle to the death in the new season of BATTLEBOTS returning to Discovery on Thursday, January 6 at 8 PM ET/PT.

More than 60 teams travel to Las Vegas for a chance to take home the greatest prize in the sport: The Giant Nut. Each night a vicious lineup of bots battle for their lives in the iconic BattleBox but only the toughest will live to see the next round.

New Zealand's End Game currently has the trophy, but teams from the USA are determined to bring it back to America. Will they succeed, or will the trophy find a new home in Europe, Asia or South America?

Rivals meet again, more determined than ever to be victorious. Former title holder Tombstone returns to the BattleBox. After missing the 2020 season, Blacksmith, Minotaur, DUCK! and Icewave make their triumphant returns to wage war against fan favorites Witch Doctor, SawBlaze, Hydra, Whiplash and Valkyrie, but only one will be crowned the top bot in the world.

"Delighted to kick off the new year and welcome viewers back into the BattleBox with 14 all-new episodes filled with some of the most intense bot battles we've ever seen," said Scott Lewers, EVP Multiplatform Programming Discovery Factual & Head of Content, Science. "Thursday night robot fighting action's back and better than ever!"

BattleBots founder and CEO Edward Roski (Trey) said, "This year's World Championship was the most exciting ever, and the battles are beyond amazing. The builders did an incredible job raising the bar to a completely new level of imagination, skill and, frankly, violence. There are shocks and upsets, and heartwarming triumphs over technical and personal challenges. It's going to be our best ever season, and we can't wait for the start of January so we can share all the drama with our millions of fans."

Adding more excitement to the battles are returning sportscaster Chris Rose and former UFC fighter Kenny Florian to provide play-by-play commentary, along with expert contributions from Pete Abrahamson, a.k.a. The Bot Whisperer, and Faruq Tauheed in the BattleBox as Ring Announcer.

Executive Producer Chris Cowan said "The best team in combat sports are back doing their thing, and the competitive firepower brought to bear by our builders in this year's quest for the Giant Nut is simply unreal. A more stacked field of contenders has never been assembled. Thursday nights are gonna be a blast, literally!"

"BATTLEBOTS," THE WORLD'S PREMIER ROBOT COMBAT COMPETITION, GETS PICKED UP BY DISCOVERY FOR TWO SEASONS WITH AN UNPRECEDENTED 80 HOURS OF ROBOT-FIGHTING ACTION

2021 World Championships Set to take place This Month in The Fight Capital of The World, Las Vegas, With Tickets Available Now

BattleBots, the world's premier robot combat competition, is about to become even bigger than before. Today, Discovery announced it has picked up an additional two seasons of BattleBots, totaling an unprecedented order of 80 hours of robot-crunching action.

In another major move, BattleBots will stage its 2021 World Championships beginning next month in the fight capital of the world, Las Vegas. The iconic BattleBox fight arena has been completely reimagined for the new seasons with extra hazards for the robots - generating even more tension and excitement for viewers.

In addition, the 2022 Championships will also be held in Vegas during the summer of 2022. All the bot-breaking action will play out in front of a live audience of dedicated BattleBots fans from around the world at Caesars Entertainment Studios. The new season will air later this year on Discovery.

"I can't wait to once again hear the iconic opening words, 'It's robot fighting time!' as announced by Faruq across Discovery platforms," said Scott Lewers, EVP Multiplatform Programming Discovery Factual & Head of Content, Science. "Vegas is one of the few places in the entire world that can match the adrenaline and fun of this competition and I'm thrilled it will be the backdrop to host these incredibly talented robot designers, builders, and fighters."

"Standby Vegas! - the bots are on their way from all over the world," said Trey Roski, BattleBots creator. "This is the most exciting development for the sport; to have a multi-year commitment from a broadcaster is what we've always wanted to enable our talented builders to have time to plan and design even more ferocious and imaginative robots for the future. It's a great day for BattleBots, and we're delighted to have such a supportive partner as Discovery. Since BattleBots started 21 years ago, I've always dreamed that Vegas would be the ideal permanent home for the sport. Now thanks to Discovery and Caesars we're achieving that goal."

"The best builders in the world, the best robot combat action, the most talented production and broadcast teams, the best platform partners in Discovery, and now the perfect host in Vegas - what's not to love about this deal? Our fans will go bonkers! The most entertaining combat sport on the planet is thriving," said Chris Cowan, Head of Unscripted TV at Whalerock Industries.

More than 65 teams will travel to Las Vegas with their fighting machines to slug it out in a series of battles to the death. The ultimate winner will take home the greatest prize in the sport: The Giant Nut, which is currently held by End Game from New Zealand.

The competition this year will be fierce. Teams from across America will compete against rivals from Europe, Asia and South America with the hope of bringing the Giant Nut back to the USA. Former title holder Tombstone will be in the field, along with current World Champion End Game. Fan favorites Witch Doctor, SawBlaze, Hydra, Whiplash and Valkyrie will also fight to hoist the Nut, while Backsmith, Minotaur, DUCK! and Icewave will hope for triumphant returns after missing the 2020 season.

Sportscaster Chris Rose and UFC fighter Kenny Florian will return once again to provide play-by-play commentary, along with expert contributions from Pete Abrahamson, a.k.a. The Bot Whisperer. Meanwhile, Faruq Tauheed returns to the BattleBox as Ring Announcer.

Audiences are invited to watch the robot fighting action from BattleBots' new home in Las Vegas, where BattleBots will tape from August 23 - September 4 at Caesars Entertainment Studios.

Tickets are available now for the public ($40-$125) and can be purchased by visiting the BattleBots ticketing page.

How do you feel about this latest BattleBots news? Share your thoughts with us in the comments below and don’t forget to stay tuned for all the renew/cancel 2021-2022 and beyond news!