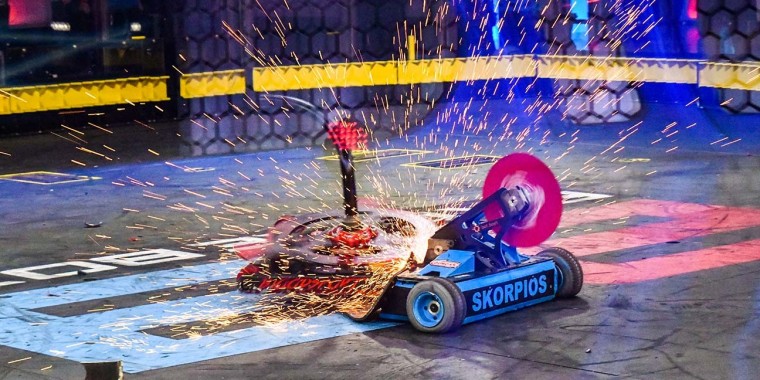 “BATTLEBOTS: BOUNTY HUNTERS” TO LAUNCH ON DISCOVERY+ WITH THE TOP ROBOT COMPETITORS SMASHING IT OUT

In the BattleBots universe, from the moment you start building a robot, everyone dreams of a chance to fight against the best in the world — the legends that define the sport. Rarely does David get to face Goliath. Until now… BATTLEBOTS: BOUNTY HUNTERS, premiering Monday, January 4 on Discovery+, will bring the top robots from all over America to battle it out against a BattleBots legend in the ultimate robot combat.

In BATTLEBOTS: BOUNTY HUNTERS, the sport has some of the top robot legends including Tombstone, Bronco, Witch Doctor, Son of Whyachi, Beta and Icewave. Each of the them have many knockouts and have smashed countless competitors before them.

In each episode, challengers will compete for the right to become the Bounty Hunter and fight a Legend. The prize: a unique place in BattleBots history, and the major share of a $25,000 cash prize payout in every episode.

Like in the regular season of BattleBots, each episode highlights the design and build of the competing robots and profiles the teams behind them. Competitors come from all types of backgrounds – from families to university students and everything in between. Every machine is homemade and constructed from a variety of materials with custom-built weaponry to destroy the competition.

In addition to watching BATTLEBOTS: BOUNTY HUNTERS on Discovery+, viewers can join the conversation on social media by using the hashtag #BattleBots and following Discovery on Facebook, Twitter, and Instagram. Fans can also use the BattleBots AR filter (WT) on Instagram, Facebook, and Snapchat to share which bot the randomizer selects for them.

Builders from around the globe get a chance to call their shot in a series of six all-new, two-hour events. Six of the most feared Bots in the sport of robot combat. Six one-of-a-kind bounty prizes.

Wondering how your other discovery shows are doing? Check out the discovery 2021 TV scorecard page, where you can find the cancel/renew status of all discovery TV shows!

How do you feel about this latest BattleBots: Bounty Hunters news? Share your thoughts with us in the comments below and don’t forget to stay tuned for all the renew/cancel 2021-2022 and beyond news!